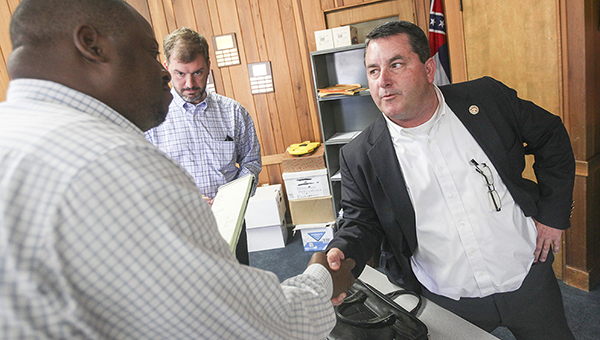 South Ward Alderman-elect Alex Monsour is waiting on a state Ethics Commission opinion on whether he can serve on the Board of Mayor and Aldermen and retain his seat in the Legislature as District 54 representative.

Monsour, a Republican, defeated then-South Ward Alderman Willis Thompson in the June 6 general election to win the South Ward seat. Several days after the election, he said he would resign his House seat before the new board is sworn in Sunday.

He said Friday he was waiting to hear from Speaker of the House Philip Gunn, R-Clinton, who was checking with the Ethics Commission whether he can serve in both offices.

A state Attorney General’s opinion indicates a person elected to a city council or board of aldermen can also serve as a state legislator because both are legislative positions. However, an attorney general’s opinion received last week by Monsour said he would have to resign his seat because the aldermen under Vicksburg’s special charter have legislative and administrative duties.

Under the city’s commission form of government, the aldermen serve as supervisors over different city departments, giving them administrative responsibilities.

The city’s charter also has a provision that board members “shall not be engaged in any business, avocation or pursuit that shall in any manner interfere with the efficient and faithful performance of their duties under the laws of the state and the city charter.”

Monsour, who is chairman of the House Ports, Harbors and Airports Committee and a member of the Appropriations Committee, said he wants to remain in the House because “there are some things I can have control of as far as what is proposed legislation to help the city of Vicksburg.”

Also, because of his position on the Appropriations Committee, he can help get funding for the city’s infrastructure.

“If I can do that, I would like to accomplish those two things, because the port is a priority of mine, and also I want to, if I can, be in the process of making sure that we get help in fixing the infrastructure in the city of Vicksburg.

“And once I do that, we’re going to go to a time specific, and that way, in the next election they can go through the cycle on it. My intention is just to stay long enough to get the things I can get done and get out of there.”

If Monsour resigns, there will be an open election for his seat, which represents Warren, Issaquena and Sharkey.