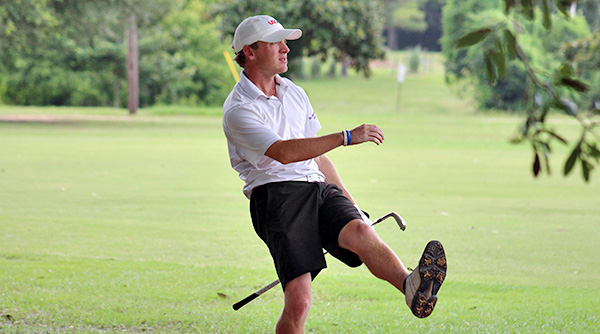 Channing Curtis tries to use some body english on his shot from under a tree on the final hole of the Clear Creek Club Championship on Sunday. (Ernest Bowker/The Vicksburg Post)

There wasn’t anything remarkable about Channing Curtis’ round at Clear Creek Golf Course Sunday afternoon, and there didn’t need to be.

With a six shot lead entering the day and only one opponent with a realistic chance to catch him, all Curtis had to do was be average to win his second consecutive Clear Creek Club Championship. That’s exactly what he was, shooting a 76 in the second round to claim an easy 10-shot victory over runner-up Keith Ehrhardt on a hot, humid day in Bovina.

“I just got it around. Both days were kind of ‘poke it around,” Curtis said. “I made two birdies yesterday and one today, so it wasn’t that great. Just figure out how to make par was the story of my two days. There wasn’t anything too exciting about my round, or too bad about it.”

Curtis finished with a two-round total of 149, while Ehrhardt wound up at 159 after shooting an 80 on Sunday. Only six golfers, one of whom withdrew after the first round, competed in the main draw of the tournament. The Club Championship was open only to members at Clear Creek.

Tom Jones finished third with a two-day total of 172, while Robert Portwood and Jim Warren tied for fourth at 175.

All five golfers played in the same group, which led to some friendly banter — mostly centered around who was in the lead for third and fourth place, where the only real competitive drama was.

“They’re constantly joking around. I love playing with them. That makes it a lot more fun. Nobody gets mad or upset too much,” Curtis said.

This was the third Clear Creek Club championship in four years for Curtis — he also won in 2014 and 2016 — as well as part of an unofficial farewell tour. The recent St. Aloysius High School graduate will begin college at Ole Miss’ Trent Lott Leadership Institute in August. He plans to continue playing amateur tournaments in the Mississippi Golf Association for years to come, but will likely see his competitive playing schedule greatly reduced in the near future.

Before then, however, he’ll have a full plate. He’ll finish July by playing in the USGA Amateur Qualifier July 11 at Annandale Golf Club in Madison, the Mississippi Junior Amateur at Old Waverly in West Point July 18-20, and the Warren County Championship at Clear Creek July 29 and 30.

Curtis also earned a spot on Clear Creek’s Warren County Cup team with his victory in the Club Championship, but it’s unclear if he’ll play. He has orientation at Ole Miss on the final day of the annual competition between the best golfers from Clear Creek and the Vicksburg Country Club.

“I’ll keep playing some tournaments in the summers and stuff. I’ll play in the Mississippi Golf Association tournaments,” Curtis said. “I don’t see it as really coming to an end. High school came to an end. Other than that, there’s still tournaments to play in and I’ll be there. I love some competition.”

While Curtis was running away with the overall club championship, the senior division had a more competitive finish.

Rodney McHann shot a 72 on Sunday to overtake Jim Darnell for the title. Darnell entered the final round with a one-stroke lead, but shot a 75 in the final round to finish at 150 for the tournament. McHann finished at 148 to win by two shots.