Honeycutt works to give back to the community 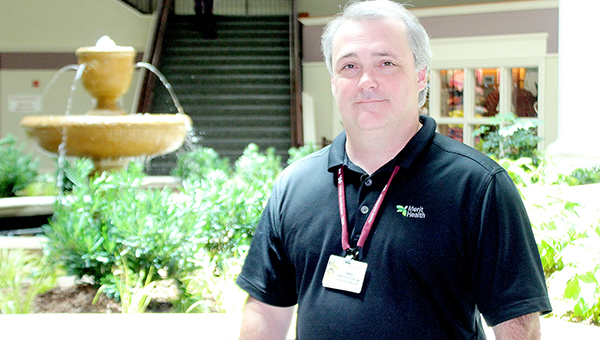 Greg Honeycutt’s experiences growing up have influenced him to become involved in the community through United Way of West Central Mississippi. (John Surratt | The Vicksburg Post)

Greg Honeycutt knows first-hand how a community helps its own.

“I was raised in a single parent family, and now that my kids are grown, I realize how much my family and my church and our community and friends helped us out whenever we were in need,” he said.

“I always wondered how my mom did it, especially since I have my own kids, and it’s obvious that I don’t think she would have done it without some help from other folks. I believe single parents are super heroes. That’s probably the hardest job, I guess.”

His life has been an inspiration for Honeycutt, the director of the radiology department at Merit Health River Region, to become involved with the United Way of West Central Mississippi and the Baby Shower, a fundraising program to help United Way and educate the public about the organization and its partner agencies.

Honeycutt has been a member of United Way’s donor investment committee, working with health care-related organizations for three years. And while he has been involved with United Way through River Region, his association with the committee began with participation in the Vicksburg-Warren County Chamber of Commerce’s 2015 Leadership Vicksburg class.

“We went on a tour of United Way, and we got to see some of those agencies,” he said. “That was what really made me realize that these agencies do to support these family groups. When we went to visit the Family Development Ccenter, and they talked about their mentoring programs and their rewards closet and how they encourage and try to break the cycle (of poverty) and help them get through that.

“I’m the outcome of breaking that cycle; I was able to get an education and get a good job, and so it really kind of struck home with me.”

He got to know United Way’s executive director Michele Connally, resource director Heidi Burrell and other staff members, “And they asked me to help them with the health care related stuff on the donor committee.”

The Baby Shower, Honeycutt said, was a community project developed by Leadership Vicksburg in 2015. “This really was 100 percent initiated by a tour of United Way, when we toured the Family Development Center.

“The Baby Shower is actually a two-fold event. Around Christmas, they have great donations at United Way because of the Angel Tree, but in the summer, there’s really not a major event, and some of the rewards closets and some of the resources the agencies use with their donations can get mighty slim.”

When the group began thinking about it, he said, it was about promoting the program around parenting day, which is July 23, and Mother’s Day. “These are good events to put this around and help get those donations during the summer months, when they’re kind of harder to get.”

All the donations, he said, go directly to United Way, which will split it among the agencies it supports.

This is the second Baby Shower.

“Last time, so many businesses contributed,” he said. “So many businesses in the community took the opportunity to do drives in their own areas, and that’s our goal, we want civic groups, churches, businesses to do their own drives, let people know about it and then on this day bring those donations or those gifts to the hospital.”

The first event raised more than $1,600, plus donations of baby supplies and equipment like playpens. All of it went to the United Way for its agencies.

Honeycutt said the reason Leadership Vicksburg decided to go with the shower was the dedication they saw from United Way and its agencies.

“We saw what a heart they had for helping these families and being there, and what I have really enjoyed the most, is learning how, with Michele’s leadership and United Way and what we’re trying to do at the hospital, is collaborate all these resources, so we don’t have redundancy, but we cover the needs as best we can.”

And the hospital, working with United Way, he said, really wanted to provide a safety net for the patients going from the hospital into the community.

“I’ve been here a long time. I think this community’s pretty lucky to have United Way and the resources we have. I don’t think that’s available everywhere.”

“I’m a robot guy. My son’s in team 4-5-6, which is FRC (First Robotics Challenge) robotics, which has represented the city in a lot of areas.”

He has also served as master of ceremonies for First Lego League competition, and as a judge at a First Technical Challenge event.

A member of Triumph Church, he is involved with the production of the Sunday service, handlling the sound and displays.
“I like working behind the scenes better so that’s what I do,” he said.

Honeycutt said his experience growing up helps keep him active in the community.

“Coming from my background, I feel like where I am today is a gift, and I definitely feel it’s my obligation to share. Other people helped me along the way; now I want to help.”