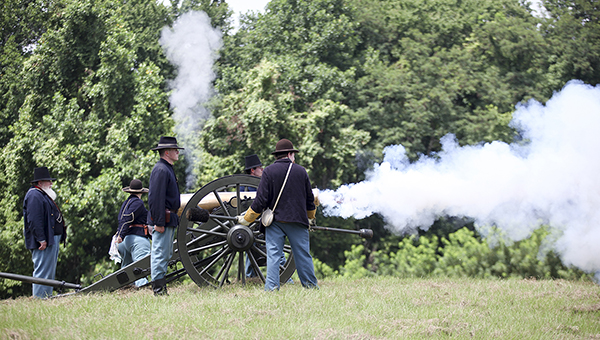 The sound of Civil War artillery echoed through the Vicksburg National Military Park Saturday, marking the start of park’s traditional commemoration of the Union and Confederate soldiers who died during the Siege of Vicksburg.

“We will be firing the cannon four or five times a day through July 4,” VNMP historian Scott Babinowich said as a crew from the Kennesaw Mountain, Ga., National Battlefield Park prepared to fire one of the Military Park’s 12-pound bass Napoleon field guns at Battery DeGolyer.

“We have a Confederate encampment by the Old Superintendent’s Quarters. We hope people will stop there so they can hear the sound of the gun as it fires from a distance.”

He said the Kennesaw Mountain crew was firing the gun because the park as this time does not have people certified to use black powder. That, he said, will change later this year.

“We appreciate having them come to do this for us,” he said.

“This is just a preview of what we’ll be doing at the park next year,” he said, adding the park is expected to resume its artillery and musket demonstrations.

A large crowd gathered at the battery to watch the firing and learn about Civil War artillery from Kennesaw Mountain Park volunteer Andy Cole, who describe the duties of each member of the seven-man crew, and discussed the ordnance used by the smooth bore and rifled cannons.

She said National Park Service regulations require people working with the weapons to be re-certified in black powder every four years and holds certification classes every other year. Kennesaw, she said, holds black powder training programs annually, and an intensive, two-day training program with drilling on the guns.

She said decisions when someone can work with the gun crew depends on how well they learn.

“Some people pick it up quickly, but some take more time, and we may start them working away from the gun and then let them work their way up.”

Across the park at the Old Superintendent’s Quarters, a small group of Confederates sat watching the gun crew work.

“You can hear the gun and feel the concussion and see the smoke,” said ranger Lela White, who was at the Confederate camp. She said a perfect smoke ring followed after one of the firings. “They’re aiming at the Third Louisiana Redan, so we’re not getting the full effect of the gun.”

The Confederate encampment was set up to resemble the 30th Alabama, which fought in the battle at the Railroad Radan. White was joined by two volunteers, Emily Stringer, who recently graduated from Warren Central High School, and James Polk, a student at St. Andrews Episcopal School in Jackson.

White said the encampment will also be going on through July 4.

“We’ll have different groups out here,” she said. “And they’ll have to sleep out here (on the ground).”