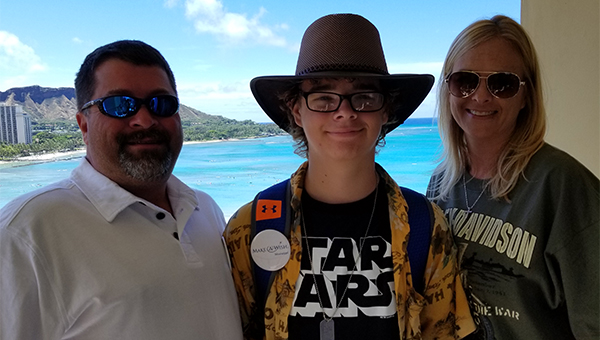 Jacob Downey poses with his parents, Todd and Brittney Downey while visiting Oahu, Hawaii. Jacob was diagnosed with Diffuse large B-cell lymphoma in February 2016 and traveled to Hawaii as part of the Make-A-Wish program. Jacob’s wish was to visit Pearl Harbor.

Jacob Downey was a normal teenage boy until life dealt him an unfair hand.

Battling cancer is a trial for those at any age, but it seems tougher on someone so young, and the family standing with them.

Thanks to the Make-A-Wish-Foundation, however, these young fighters can be granted a wish in an effort to impart hope, strength and a little bit of joy, and Jacob’s wish was to visit Pearl Harbor in Oahu, Hawaii.

“The reason why I wanted to go to Pearl Harbor is because I love history,” Jacob said.

“When I was in sixth grade, I remember my teacher telling me about Pearl Harbor and how beautiful it is, so I decided one day I was going to see it,” he said.

But before he could make the journey to the Aloha state, Jacob had to undergo rounds of chemotherapy treatments.

“Seeing your child having to endure everything that goes with the diagnosis breaks your heart,” Brittney Downey said. “You want to be able to take the pain and the sickness away, so he doesn’t have to deal with it.”

Brittney said she and her husband, Todd, knew something was up with their son’s health because he was tired all the time and was experiencing bouts of nausea.

On Feb. 8, they took Jacob to the family doctor.

Brittney said doctors examined Jacob and thought he had an enlarged heart before transferring him to Blair E. Batson Children’s Hospital in Jackson.

Their doctors discovered he had fluid around his heart, but were unsuccessful in draining it.

Only after a CT scan was the tumor discovered.

Brittney said she and Todd waited days before sharing the news with their son.

“It was scary at first,” Jacob said, after he was finally told of his diagnosis. “But the farther you go the better it gets.

“When we were at the hospital people there made it feel like we were home, and later on when I started making friends, it also helped out that I knew that I wasn’t alone.”

Brittney said Jacob’s treatment scheduled consisted of five days of continuous chemotherapy treatments and then he would be able to go home for 16 days.

“He had six rounds of this,” she said.

During treatments, Brittney said she and Todd tried to keep Jacob’s life as normal as possible, but it was challenging.

There were times he had to remain isolated, so he would not pick up any germs that could cause him to become sick and delay his chemotherapy treatments, Brittney said.

Throughout Jacob’s treatments, Brittney said her family received encouragement and support from family, friends, their church family and the Vicksburg community.

“You never really know what you are made of until you go through something like this,” she said, and gave credit to faith in God and prayers. “Cancer has been the most difficult thing that we have gone through.”

The Junior Auxiliary of Vicksburg, which is an affiliate with Make-A Wish Mississippi, hosted a send-off party for Jacob at the Wilkinson Ver Beck Branch prior to the trip.

“This trip is something that we probably would never have been able to give Jacob,” Brittney said. “We would like to thank the ladies in the Junior Auxiliary who spent their time from start to finish in the wish process and making Jacob’s dream come true.”

“Pearl Harbor was even more beautiful than I imagined,” Jacob said, adding, “When it was at the end of my treatment it was the best thing ever. Make-A-Wish is awesome.”