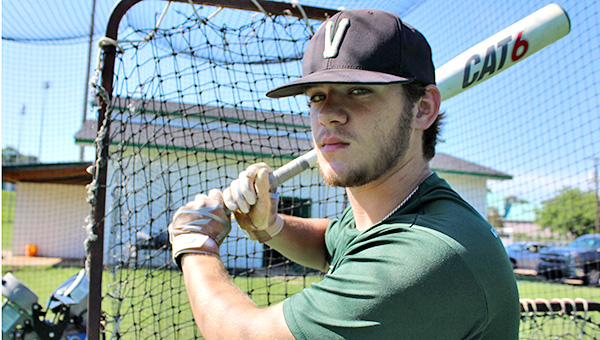 Chandler Luke couldn’t sleep, couldn’t eat, could barely see straight. He had one chance to make a good impression if he ever wanted to play baseball again, and the enormity of the moment was about to swallow him up.

The recent Vicksburg High graduate made the long drive to Clarksdale for his tryout with Coahoma Community College, the only school to give him one. He stepped into the batting cage, his eyes fixed on the pitcher, and did something he immediately regretted.

“I got up there, took one swing and popped it straight up,” Luke said.

In one instant, his baseball future flashed before his eyes. Fourteen years of work ruined in one mistimed swing. Coahoma coach Colt Burns immediately said five words that made it clear his mind was made up.

“He was like, ‘I want to sign you,’” Luke said. “I started seeing straight. I could see a mile away. It felt like I could breathe. He told me to stay in shape, put on 15 pounds, but if I could go up there right now I would. I’d just say take my summer away right now and we can go up there.”

Luke, a catcher, happily accepted the offer and signed with Coahoma in early June. Even if Coahoma was the only team to give him a chance, he was eager to get it and run with it.

“It feels good. It’s like a dream come true,” Luke said. “It’s a big sigh of relief, too, because I can go to sleep at night now. I thought I might never touch a baseball bat again. I’ve never been just a student. I don’t know how it would work out.”

Luke’s path to a college scholarship traversed a lot of obstacles. He moved into the starting lineup as a sophomore in 2015, but broke his right hand four games into the 2016 season and didn’t play again.

He was scouted by Southwest Mississippi, Copiah-Lincoln and Holmes County Community Colleges this season but had “bad games” each time and those schools eventually backed away.

Luke wasn’t discouraged, though. Vicksburg coach Derrick DeWald said he’d often come to the team’s fieldhouse during his off-period at school and find Luke there doing something to improve his skills.

“Back in January, I took him to a catching camp at Southwest Community College, and on the way back I asked him, ‘How bad do you want to play next year?’ And he said, ‘Coach, I want it bad.’ From there, he was out here in third period putting in the time, by himself,” DeWald said. “That’s what it takes. If a kid really wants to play at the next level, they’re going to see them putting in work on their own. He did that, and for that he’s being rewarded by being able to continue his playing career at Coahoma.”

The extra work paid off. Luke led the Gators with a .339 batting average, seven doubles and 12 RBIs this season. He was also the team’s best pitcher, with a 3.91 ERA, 42 strikeouts and only 15 walks in 34 innings.

“He did a lot for us. If he wasn’t pitching, he probably would have hit about .450 because he wore down at the end of the year,” DeWald said. “But he did it, he didn’t complain, and helped us move this program in the right direction.”

Now he’s taking his work ethic and skills to Clarksdale, where he’ll try to help Coahoma improve on this year’s 20-24 finish. The Tigers have a hole to fill at catcher, and Luke is ready to do it.

He’s not even nervous about it.

“I wasn’t ever really worried about if I was going to start or play. It was all about who was going to pick me up,” Luke said. “Once somebody picked me up, I knew I was going to work hard and do whatever they need me to do. They said whoever the better man is, is going to play. I’m going to get there and work my butt off and see what happens. If I don’t start, I don’t start. I’ve got next year.”