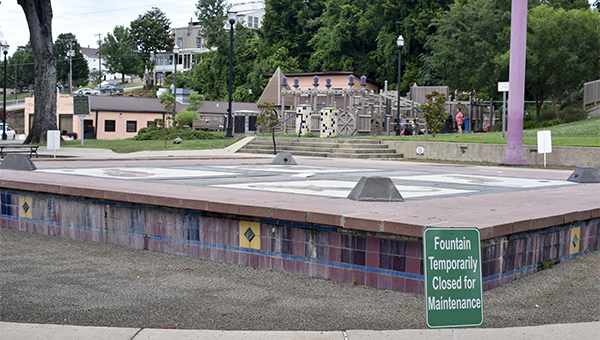 The splash pad in downtown Vicksburg should be up and running by the end of the week.

The fountain went down last week after a filter motor locked up, which required a new part to be ordered and installed.

“We ordered it last week and we thought they could get it in last week, but it didn’t come in,” Vicksburg Parks and Recreation director Joe Graves said.

The part is supposed to arrive Thursday Graves said and then electricians will have to install it.

“Electricians go in and wire it and get it started and we are ready to go,” he said.

Graves said the issue was caused in part by people wearing the wrong type of clothing while playing in the fountain.

“What is happening is people come in to use the fountain and they have cotton clothing other than swimsuits,” Graves said. “When those filters get clogged with lint and stuff that runs through those filters to clean it, it puts a lot of pressure on the filter motor.”

Graves said the build up of lint caused the motor to overheat and lock-up putting the fountain out of commission.

“It causes a lot of excess work having to go in there and clean the filters every other day because they are full of lint,” Graves said. “The more lint you’ve got, the more pressure it puts on the filter motor.”

Along with the new motor, Graves said they have ordered signs to encourage people to wear swimsuits when playing in the fountain.

“We have some signage coming in and we’re going to try to set it up to at least let the public know that if they’re going to use the fountain to at least try to have a swimsuit on,” Graves said. “We know its not going to be every time.”

The fountain is located in Catfish Row on Levee Street in downtown Vicksburg and is open daily from 9 a.m. to 8 p.m.

Monsour decides to resign his seat in Legislature