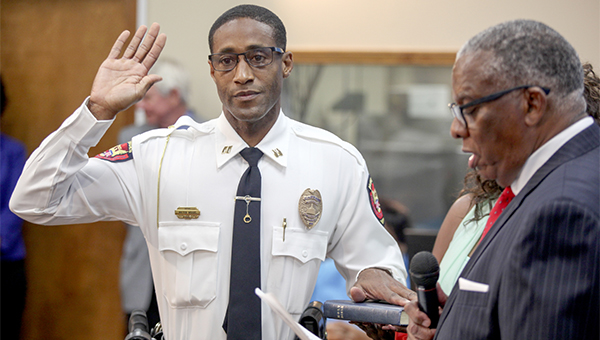 A 17-year veteran on the Vicksburg Police Department has been named its new chief.

Capt. Milton Moore, the commander of the police department’s patrol division, was named the department’s chief by the Board of Mayor and Aldermen Wednesday, replacing Walter Armstrong, who served in that position for eight years.

Mayor George Flaggs Jr. said he selected Moore because “of his potential, ability and his passion for the city. And I thought he was committed to reducing crime by way of community policing.”

Moore has served as an officer with the Vicksburg Police Department since 2000 after originally being hired as a firefighter a year earlier. He had been patrol commander for three years at the time of his appointment to chief.

Moore is a veteran of the U.S. Navy and served during Desert Storm in 1991.

He said his selection as chief  “is overwhelming; it’s exciting and it’s somewhat a bit scary. I’m going off into something different now and I’ll have more responsibility, but I’m ready for the challenge.”

Moore said he anticipates meeting with the entire department this week or no later than July 11.

Two of his immediate plans point toward to enhancing a community policing program.

One involves re-establishing the NET, or Neighborhood Enforcement Team, “So I can get my guys out in these neighborhoods.” The NET Team is a special team of officers that steps up enforcement and patrols in areas in response to frequent citizen complaints about drugs, disturbances, loitering and other problems.

Using the bicycles, he said, will allow the officers “to be much more upfront and personal” with residents. He said the bicycle patrol will not be limited to one area of the city, but will be used wherever it is needed.

“If I get a complaint and someone needs an extra patrol in a neighborhood, we could utilize the bicycles, hopefully,” he said. “We have four bikes that are not being utilized as they should. So I’m looking to put them to good use.”

He said the bikes are a big part of his plan to implement a community policing program in the city.

He also wants to have a minimum of two officers per beat per shift in the city.

“Right now, we have 10 recruits going through the hiring process; hopefully, we can employ those 10, and we can accomplish that.”

He said his experience with department will help him in his new position.

“I came up through the ranks from a beat officer, and I worked my way up to the rank of captain. I try to lead by example. I have done a lot in the community, and I have dealt with situations and I think I’m competent, and I’m ready to do the job. I’m ready to hit the ground running.”

The appointments of the police and fire chief were the topics of speculation in the community, with many people wanting to keep Armstrong and former Fire Chief Charles Atkins in their positions.

North Ward Alderman Michael Mayfield was a key supporter of both Armstrong and Atkins.

“I have no doubt that we have assembled a great group of people, to help in the operation of taking this city forward” Mayfield said after the swearing in ceremony. “I think they’re all experienced, I feel good about the fact that we can look forward to the city being bigger, better and safer as it relates to police and fire.”

He said he supported Armstrong and Atkins because of their tenure with the city, their due diligence as department heads, and he believed they brought their respective departments “up to where they should be in the 21st century.”

“It was kind of disheartening to see them removed, but the bottom line is the board has voted and it’s time to move forward from here, and everybody make sure they’re doing what they’re supposed to be doing every day to make this city bigger and better.”

Monsour said there were several things about Moore that helped his decision, including his experience and the fact he worked his way up the ranks in the police department.

“This is an administration that’s going to work together,” he said. “We’re going to get things done; we’re not going to fight.

“The main thing is, the previous board set the agenda for the mayor to be able to appoint the police chief. He appointed Milton, and I looked at his resume, (and) I didn’t see anything in there that would disqualify him from getting a second.”

Had there been something in Moore’s background to disqualify him, Monsour said, he would not have voted for Moore.