Federico takes over as ULM coach 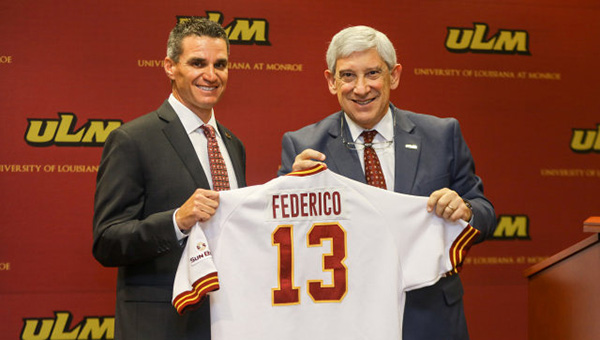 Michael Federico is leaving the Golden Eagles’ nest to fly on his own.

Despite that lack of championship pedigree, Federico was determined Thursday that the program can be a consistent winner in the Sun Belt Conference and beyond.

Federico has deep roots in the Gulf Coast region. He was born and raised in Slidell, Louisiana, played college baseball at Hinds Community College and Southern Miss, and later served as an assistant coach at Memphis and USM.

He was also the head coach at Meridian Community College from 2000-04 and led the team to two appearances in the NJCAA Division II World Series. He also played in two NJCAA World Series during his time at Hinds.

Federico’s biggest success as a Division I assistant came at Southern Miss. He was the 2015 Conference USA Assistant Coach of the Year when his pitching staff posted 10 shutouts and led the league with a 3.14 ERA.
Federico spent nine seasons at Southern Miss in all, including the last eight as the pitching coach. The Golden Eagles have led Conference USA in earned run average two of the past three seasons, and set a school record this season by winning 50 games.

It’s the same kind of success he envisions for Louisiana-Monroe, a school with a similar profile to Southern Miss as a small Division I program in a state where Southeastern Conference rivals often dominate the battle for recruits and fans.

“It’s been proven here, and I know it can happen again, and there’s basically one goal that I’ll have and that’s to work every day to constantly try to be going to Omaha,” Federico said. “Ultimately, that’s the goal every college baseball team is trying to get to. If you can get into that regional, you have a chance. It’s been proven that the smaller teams, like us, it can happen.”

Federico also espoused another major goal on Thursday — turning his players into top-notch students and leaders, as well as baseball players.

“My vision for the Louisiana-Monroe baseball program is kind of simple,” Federico said. “I want to shape the young men that we’re coaching into being productive citizens, so that when they leave here they can contribute to society in a positive way whether they’re playing in the big leagues or working in the local mill.”

While Federico was settling in over in Monroe, Southern Miss was working hard in Hattiesburg to find his replacement.

USM has not yet announced the hire, but the Sun Herald reported that Louisiana Tech coach Lane Burroughs has confirmed that Ostrander is leaving to take the job in Hattiesburg.

Ostrander was the head coach at Jones County Junior College for seven seasons, and Gulfport High in 2007 and 2008 before being hired at Louisiana Tech.

A Monroe, Louisiana, native, Ostrander has also coached at his alma mater Delta State and Arkansas State.
At Louisiana Tech, Ostranders’ pitching staff had an ERA of 4.44 last season.