VCC preparing for roaring Ritz on the River 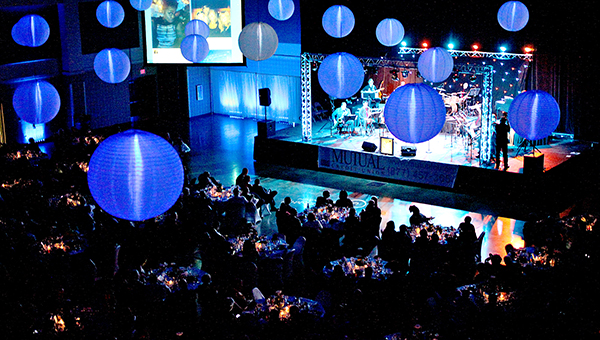 A look down on the main hall of the Vicksburg Convention Center during the 2015 Ritz on the River. (Vicksburg Post file photo)

It is almost time to don your flapper dress and prepare for a night of 1920s-themed celebration during the annual Ritz on the River at the Vicksburg Convention Center.

The fourth annual Ritz on the River will take place July 13, and the 1920s theme was chosen to help the VCC celebrate its 20th anniversary.

The evening features a dinner at 6:30 p.m. and a concert starting at 8 p.m. Tickets that include both dinner and the concert are $50 per person and will only be sold in advance.

“We’ve got about 5 tables left, which is about 50 tickets for dinner and then that makes us 40 tables full,” Kirklin said. “Doors open at 6 o’clock, sit down at 6:30, have dinner and then we’ll pass out the special gifts that everyone gets during dinner. We’ll have a special presentation up on stage and then the show.”

The VCC’s official catering company Palmertree Catering will serve dinner. The menu for the evening includes a crunchy romaine salad, a ritzy ribeye with Cajun cream sauce on the side, bacon wrapped shrimp, asparagus, a roll and a chocolate éclair desert.

General admission tickets are also available for those interested in attending the concert only.

The show will feature Downtown Band from Nashville and tickets are $10 in advance or $15 at the door.

“We go months and months before this event to try and find someone that has never played in the area before,” Kirklin said. “They’ve opened for Elton John. They’ve been a top 10 band in the United States. They are just a fun band. That is what we look for and the horns are a must. They have to have horns. It is very required for any band that plays at Ritz on the River.”

Those attending are invited to wear their ‘20s attire, and Kirklin said those that don’t come in theme related attire should plan to wear “dressy business.”