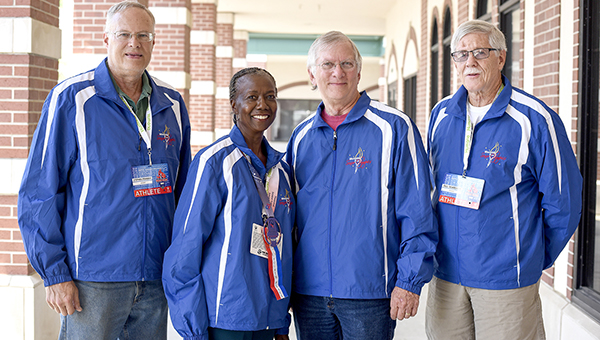 Age is only a number, especially for the four Vicksburg athletes who competed in the National Senior Games in Birmingham in early June.

Joyce Beacham, Charlie Lutz, Bill Seaburgh and Steve Pranger were among the more than 10,500 athletes who competed in the 30th National Senior Games.

Beacham competed in the 5K and 1,500-meter race-walks, Lutz and Seaburgh competed in doubles table tennis and Pranger competed in race walking and eight track and field events.

“It was a lot of fun,” Beacham said. “I saw some really good senior athletes. They didn’t look like they were seniors at all. They participated like they were in their 20s and 30s at the most. There were people there from age 50 to 90-plus. They were all in good shape. Mississippi had a really good contingency of 40 to 50 people.”

Beacham was the only competitor of the four to bring home a medal after placing third in the 5K race walk in the 60-64 age group with a time of 36:13.84. She also earned a ribbon with a fourth place finish in the 1,500-meter race walk.

Seaburgh competed in the games for the fourth time after previously competing in Louisville, San Francisco and Houston.

He and Lutz won the state championship in doubles table tennis in the 65-69 age group, but they ran into a much higher level of competition in Birmingham.

“The competition was fierce,” Lutz said. “We didn’t do as good as we’d hoped, but we had a good time. We enjoyed talking to all the people and just being there. We basically play once a week at our church on Monday nights. We were able to get some other people there to play against us quite a bit the last few weeks.”

Pranger had a full schedule during the competition with sometimes as many as three events in day.

He competed in the 55-59 age group and said he realized just how strong the competition is at that age group at the national level.

“Here in race walking, I’m very good, but I found out when I got there people are a lot faster. That is the same thing in almost all of the events.”

The senior games features athletes from all 50 states and ranging in age from 50 to 103.

“It was an eye opener,” Beacham said. “It keeps it in the back of your mind that you really want to stay in shape because those senior citizens are really in shape. It promotes good health and people taking care of themselves so when they get a little older they won’t have so many health issues.”