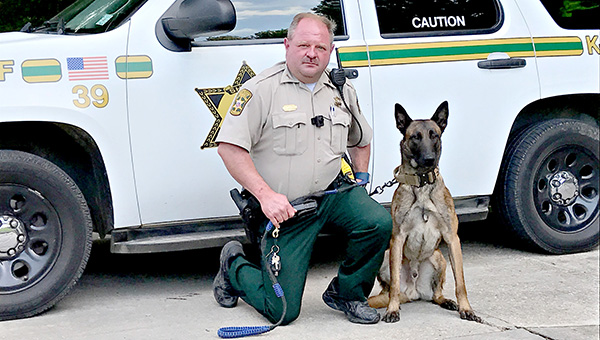 INJURED OFFICER: Warren County sheriff’s deputy Rick McDaniel kneels with his K-9 partner Soldier. Soldier was injured Saturday while trying to catch a suspect fleeing deputies and was injured. Sheriff Martin Pace said the dog is expected to make a full recovery from its injuries.

A Warren County man faces multiple charges after eluding sheriff’s deputies for more than five hours after running from a deputy trying to stop him on Nailor Road, Sheriff Martin Pace said.

Thomas Bruce Wilkerson, 26, 122 Lee Circle, is charged with failure to yield to a law enforcement officer, resisting arrest, failure to comply, simple assault on a police officer and assault on a law enforcement K-9. Pace said Wilkerson could possibly face drug charges pending test results on a loaded syringe found in his pocket after his arrest. The syringe and its contents were sent to the Mississippi State Crime Lab for analysis.

He was being held without bail in the Warren County Jail pending an initial appearance in Justice Court.

Wilkerson was treated for a dog bite he received when the sheriff’s office K-9 Soldier bit him during the chase.

The dog was also injured when Wilkerson picked it up, slammed it to the ground the tossed it down a ravine. Pace said the dog was treated for an injury to its leg and a paw, and is expected to make a full recovery.

The events leading to the chase began about 3:20 p.m., Pace said, when deputy Connie Ricketts attempted to stop Wilkerson for reckless driving in the 4800 block of Nailor Road and he fled, later driving into the yard of a home, left the car and ran into a nearby wooded area. Ricketts followed, but was unable to catch him.

About 20 minutes later, deputy Rick McDaniel saw a man meeting Wilkerson’s description walking on Nailor Road and attempted to stop him. The two got into a tussle with Wilkerson pushing the deputy down and running off. McDaniel opened the door to let Soldier out, and the dog caught up to Wilkerson and bit him before it was picked up, body slammed and tossed down the ravine.

Authorities then called one of the Vicksburg Police Department’s K-9s and for more deputies.

“We were getting calls from people who saw the subject walking in the area,” Pace said, adding he also saw Wilkerson and chased him but was unable to catch him. He said he was caught about 8:20 p.m. after deputies were able to surround a wooded area off Grange Hall Road where he was hiding.