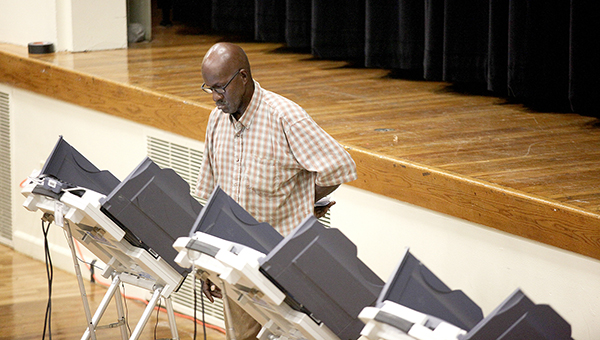 Roosevelt Mitchell votes in the municipal election at the Vicksburg Auditorium in early June. During the election, in addition to voting on mayor and aldermen candidates, city voters approved a tax plan to pay for a new sports complex. (Courtland Wells | The Vicksburg Post)

Starting in October, eating out in Vicksburg will cost more.

The Board of Mayor and Aldermen Monday adopted a resolution levying the special 2 percent sales tax on restaurant food and beverage sales and hotel room rentals in the city effective Oct. 1.

More than 60 percent of the voters participating in the June 6 municipal general election approved levying the special tax to finance construction of the proposed sports complex on the city’s Fisher Ferry Road property.

Revenue from the special tax was initially estimated to bring in about $1 million. However, based on the revenue from a special 1 percent sales tax for the Vicksburg Convention and Visitors Bureau levied on food and beverage sales and hotel room rentals countywide, the total revenue could be higher.

According to information from the city’s accounting department, the 1 percent VCVB tax averaged $1.18 million per year from 2012 through 2016. Based on that average, the 2 percent sports complex levy could bring in between $2 million and $2.36 million a year.

In a related matter, the board passed a resolution repealing the special 2 percent sales tax on hotel room rentals for the Vicksburg Convention Center that was passed in 1995. The tax goes off the rolls Sept. 30.

The convention center tax is being repealed because the city is only allowed to levy 3 percent in special sales taxes under state law.

The difference will be paid out of the city’s general fund. Between 2011 and 2015 the tax raised an average of $595,670 to support the convention center.

City attorney Nancy Thomas said the resolutions will be sent to the Mississippi Department of Revenue.

“This will give notice to the Department of Revenue that at the end of September we will stop collecting the 2 percent tax for the convention center,” Thomas said, adding the board will also be giving notice it intends to begin collecting the sports complex tax in October.

Department of Revenue spokesperson Kathy Waterbury said city officials have to send copies of both resolutions so revenue department officials can notify taxpayers and make the adjustments to their collection systems.

Besides a copy of the resolution of intent to levy the tax, she said, city officials must send a certified copy of the election results to the state and the proposed starting date.

Because the new tax includes restaurants, she said, “That means we have to notify all of the restaurants and anyone who sells prepared foods, which qualifies as a restaurant, in Vicksburg.

“We will have to do a little programming to our system to account for restaurants, but since the rate’s the same for hotels, it should a matter of us adding some taxpayers. The big thing for us is making sure we get them all.”

With the exception of a fee for collecting it, Waterbury said, the city will receive the full amount of the money collected from the special tax because it is an additional, or separate, levy besides the sales tax.

“It is accounted for differently,” she said.

The total tax on hotel room rentals will remain at 10 percent — the 7 percent state sales tax plus the special 1 percent VCVB tax and the 2 percent tax.

Diners presently pay 8 percent on the dollar to eat out — the combination of the state sales tax and the 1 percent VCVB tax.

Beginning Oct. 1, people eating in the city’s restaurants will be paying an extra 2 cents in tax on each dollar they spend, or 10 cents on the dollar — a combination of the city and VCVB taxes and the state sales tax.

The Legislature in 2015 approved a local bill allowing the city to levy the tax with voter approval to support the sports complex project.

Mayor George Flaggs Jr. Wednesday appointed a seven-member committee to oversee the design and development of the sports complex. An appointed commission will oversee the complex’s operations after its completion.

In another tax matter, the board approved a resolution to renew the special 5.05 mill property tax for the downtown business taxing district, and set a public hearing on the tax for Aug. 25.

Those in the district — which is basically defined geographically from Bridge Street to First East Street and Adams Street to the riverfront with some curves and exceptions — have earmarked the tax to go toward promoting growth and the welfare of the central business district.

The tax raises about $43,710 per year, which is used to help cover the cost of salaries of those who work with the Vicksburg Main Street program, as well as the cost of promotion businesses in the downtown area.