Yocum storms back for Junior Championship 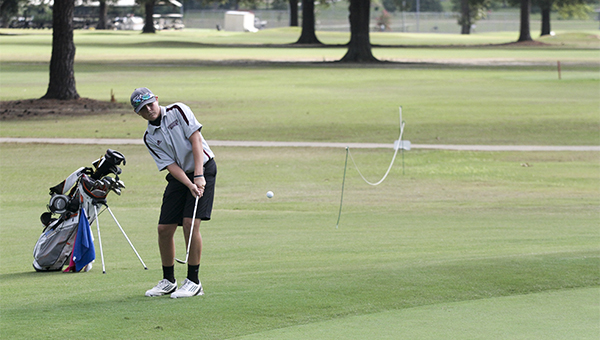 Luke Yocum, 14, did not like his chances of coming back.

Facing a 6-shot deficit entering the second round of the Warren County Junior Championships at Clear Creek Golf Course Tuesday with only nine holes to play, Yocum didn’t enter expecting to be the one holding the trophy at the end of the day.

“I really did not feel comfortable with my chance on hole one, but I just kept on hitting shots good,” Yocum said. “Just had to find fairways and find the green.”

After nine rounds of back and forth golf against Bryson Whitaker, 13, the title was Yocum’s with a one-shot victory.

Yocum, who shot a 47 in the first round Monday, and Whitaker, who held the lead with a 41 in round one, matched each other shot for shot on the first hole Tuesday as both players scored an even par 5.

Whitaker pared No. 2 with a three while Yocum bogeyed the hole with a four to fall seven shots behind.

The momentum began to swing in Yocum’s favor on No. 3 when he shot a five to bogie the hole, but Whitaker shot a triple-bogie seven to cut his lead to five strokes. Whitaker then double-bogied No. 4 with a five and Yocum made par with a three to cut the lead to three strokes.

“About the fourth hole when I hit it way left,” Whitaker said of when he realized Yocum might come back. “It went inside the woods and I kept on chunking it. I couldn’t get it.”

Whitaker’s lead disappeared for good one hole later when Yocum made par on No. 5 and Whitaker hit his second triple-bogey of the day.

“Wedge shots mainly,” Yocum said of what changed between rounds one and two. “I played well. Had quite a few pars and tried to keep bogeys at a minimum.”

Whitaker and Yocum split Nos. 6 and 7 and were tied with two holes to go in the tournament.

Yocum responded with a par on No. 8 to Whitaker’s bogey and then the duo had matching bogeys on No. 9 to clinch the title for Yocum.

“I couldn’t hit my irons at all,” Whitaker said of the second round. “I kept on chunking them. I wasn’t really taking my time. I got really frustrated and I just gave up on myself.

“It is just how it goes. Golf you can do good one day and you do horrible on the next day.”

In the 11-12 age group, Carson Smith, 10, entered Tuesday’s second round with a seven-shot lead. He extended it to 16-shots with a 52 in the second round. He finished with a combined score of 107 for the two rounds after shooting a 55 in the first.

Vaughn Hynum, 10, entered the second round five-shots out of second place after shooting a 67 in the first round, but he climbed his way back in shooting a 56 in round two for a total score of 123 to finish behind Smith.

Nick Neihaus finished third in the age group with a total score of 127 after shooting a 62 in round one and 65 in round two.