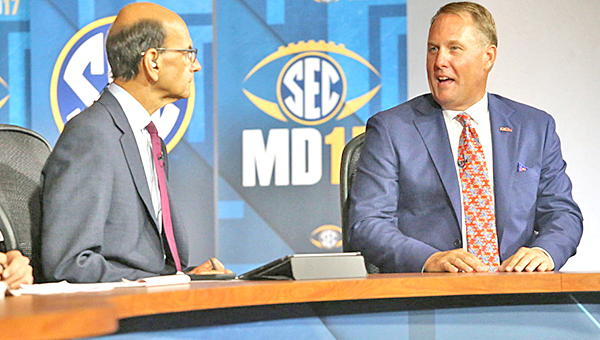 HOOVER, Ala.  — Hugh Freeze clearly wanted to talk about football, so he did.

Freeze delivered a 16-minute opening statement about his Mississippi team while pointing out he couldn’t talk specifics about a long-running NCAA investigation. Predictably all but two of the nine questions he fielded from the podium after that dealt in some fashion with the off-the-field issues facing his program.

That came as no surprise, of course.

“I mean, we obviously have created it in and around our program,” Freeze said Thursday at Southeastern Conference media days. “The length of it, we can sit here and debate all of that. But you can’t. We’ve got to be responsible for the areas which we were deficient in, that we didn’t either react or act properly, or whether it was staff or whether it was boosters.

“So we have to own that. And me being in the position I am, I’ve got to stand and look people in the eyes and take that.”

Freeze was the last of the 14 SEC coaches speaking at media days. South Carolina’s Will Muschamp and Auburn’s Gus Malzahn also had their turns before reporters Thursday morning, though the questions from reporters were decidedly different.

Freeze, in his sixth year at Ole Miss, didn’t give much insight into the NCAA investigation. He also said he couldn’t comment on a lawsuit filed Wednesday by ex-Mississippi coach Houston Nutt against the university and its athletics foundation that alleges a breach of his severance agreement because of false statements he says school officials made during the probe.

The Rebels are facing 21 allegations that include academic, booster and recruiting misconduct and have already self-imposed several sanctions, including a one-year postseason ban.

Freeze said he has had the “unwavering” support of the Ole Miss administration.

The Rebels are coming off the first losing season of his five-year tenure and must replace six starters on offense and five on defense.

For Muschamp and Malzahn, both can point to the past as reason for optimism.

Malzahn compares this to his first Auburn team, which won the 2013 SEC championship after opening amid modest expectations with a transfer quarterback. Then the new QB was Nick Marshall from the junior college ranks. Now, it’s transfer Jarrett Stidham who’s the presumed front-runner for the starting job.

Malzahn thinks the similarities go well beyond that.

“The fact that we have a very hungry team,” he said. “They’ve got something to prove. If you look back to 2013, I feel the same way about our team. We’re in a good spot. We’ve got to seize the moment.”

Muschamp exceeded some expectations with a six-win debut season for the Gamecocks. He’d love to now duplicate his second year at Florida, where the Gators went 11-2 and made the Sugar Bowl in his best season in Gainesville by a longshot.

Muschamp says it helps to have more familiarity with the roster and the individual players, especially with more of his own recruits in the fold.