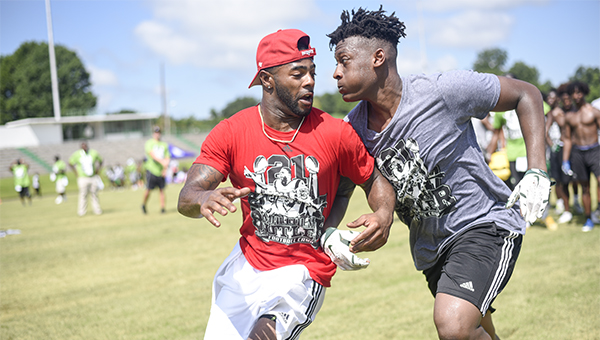 The New England Patriots will officially open training camp July 27, but on Saturday one of their star players made one last trip home before the season gets underway.

The camp was divided into two sessions with high school players training in the morning session and younger players participating in the afternoon.

“It is great to see it continue to grow,” Butler said. “This is my third one and it is going well. I would just like to thank everybody for their support. All the sponsors and all the parents sitting in the hot sun watching their kids come out here and get better.”

“It is a great thing,” Butler said. “Growing up, I always wished I could meet an NFL player and go to an NFL player’s camp and God blessed me to have it right here.”

This was the first time the camp has been split into two sessions after the first two years of the camps were held as one big session. The split allowed the training to be ramped up for the older kids and also doubled the amount of player that were able to participate.

“I am a competitor and I like to see competitive things,” Butler said. “Not saying the younger kids can’t compete with each other, but there is level to every thing. Some of the older guys asked me when are you going to do something for the high school kids and that is when I came up with the idea to do two separate camps.”

The older players were divided into groups and spent time working on technique, conditioning and footwork, while also competing in one-on-one drills.

“I liked the footwork, offense, defense, it was longer and I liked the way we stretched. It was great,” T.J. Johnson said. “Some NFL players would just keep on with the season and wouldn’t have the opportunity to come back and some NFL players don’t even come to their hometown. That is what I like about what Malcolm Butler did.”

The younger players had a chance to work on basic skills such as route running and catching the ball.

Butler took a roundabout route to the NFL through Hinds Community College, Alcorn State University and West Alabama before going from undrafted free agent to Super Bowl hero in one year.

Now with two championship rings in his possession in three years, he is using his story to inspire the next generation of Vicksburg athletes.

Where have all the dragons gone?