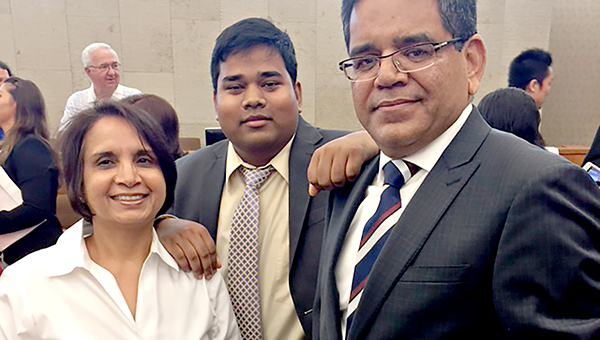 NEW CITIZENS: Michel Thakur, right, his wife, Rashmi, and son, Prafulla, center, became U.S. citizens at a ceremony in Jackson on July 6. The Thakurs own and operate the Pizza Inn on Clay Street in Vicksburg.

Michel and Rashmi Thakur arrived in the U.S. from Delhi, India, with $10,000 in their pockets and college educations.

Michel has a master’s degree in architecture and Rashmi is a chef.

Life in their homeland was not dire for the Indian couple and their three-year-old son, Prafulla, but America offered adventure and advanced opportunities.

After a stint in Florida, the family eventfully moved to Vicksburg, and in 2009, they purchased the Pizza Inn on Clay Street.

Since moving to the River City, the Thakurs have become an integral part of the community and now in addition to Vicksburg being their home, the family can also call the U.S. their home.

“Becoming a U.S. citizen has given me a stronger feeling of belonging,” Michel said.

The Thakurs first came to the U.S in 2003, and the trip had started out as just a visit, Michel said.

“We just came here to see what things were like.”

Michel and Rashmi were already parents and knew that moving to another country would require vast adjustments.

However, once here, the couple realized the advantages of a move.

“To be very frank, there is a certain level of growth you can achieve in a third world country through legitimate means and after that things have to take a turn for the more ambitious kinds of people through legal or illegal means to grow beyond a certain limit,” Michel said.

The couple knew they had already peaked in their professional careers in India, so they decided to make the move to the U.S.

Once the decision was made to stay, the couple obtained work visas, and in 2008 applied for their green cards.

“It takes five years after you get your green card to become a citizen,” Michel said, adding that the process was easy because the “system was very organized.”

In addition to obtaining a green card, the official website of the Department of Homeland Security states that the requirements for becoming a naturalized citizen include proof they have lived for a least three months in the state where they apply, show they have been physically present in the U.S. for at least 30 months out of the five years immediately preceding their green card, be a person of good moral character, demonstrate an attachment to the principles and ideals of the U.S. Constitution, be able to read, write, and speak basic English and have a basic understanding of U.S. history and government (civics).

A test is required for the latter two.

You have to take an English and civics test, Rashmi said.

“This is a good process, because you come to know so many things you don’t know about the country,” she said.

Answers to the civics exam are comprised from 100 possible questions, and the English exam is not hard if you are educated, Rashmi said.

“They make you write a sentence to show that you understand the language.”

Thirty-four immigrants including the Thakurs were sworn in at the Jackson location, with more than 100 people witnessing the celebratory moment, Michel said.

Prafulla or P.T., as friends call him, said it felt pretty nice to become a naturalized citizen.

“I am finally now not something my friends casually joke about,” he said.

“There was a joke we had with our history teacher where they said ‘if you don’t pass your civics exam, they will deport you back to India.’”

P.T is a graduate of St. Aloysius High School and is currently a student at Hinds Community College.

For those born in the U.S., citizenship rights may be taken for granted, but not so for those who have had to earn the privilege.

Rashmi said she looks forward in getting to vote and Michel said buying a gun and traveling would be made easier.

Before, if the couple wanted to travel overseas, they would have to request a Visa at least one month prior to a trip.

Now they will only have to apply for a U.S. passport and will be able to book their dream vacation to Italy without delay.

India is a country that does not allow dual citizenship, Michel said, but the couple has no qualms about this.

They have both embraced their adopted country and their hometown of Vicksburg.

“We love this town,” Rashmi said.

For those who are interested in seeing how well they would fare in taking a naturalized citizen’s civics’ exam, visit my.uscis.gov/en/prep/test/civics/view.