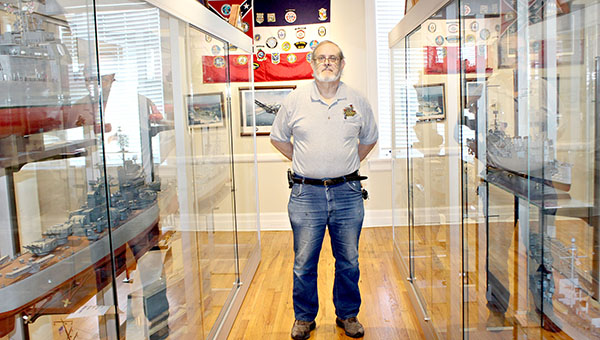 MUSEUM EXPANDING: Old Depot Museum director and curator Dave Benway stands between display cases of ships on the second floor of the Yazoo & Mississippi Valley Depot on Levee Street. The cases will be relocated for display in the former Vicksburg Convention and Visitors Bureau offices, opening the way for the relocation of the museum’s diorama of the Siege of Vicksburg. (John Surratt/The Vicksburg Post)

When Dave Benway looks at the second floor of the Yazoo & Mississippi Valley Railroad Depot on Levee Street, he sees a new home for the Old Depot Museum’s centerpiece — the Vicksburg battle and siege diorama.

“But before we can do that, we’re going to have to move a lot of things,” said Benway, the museum’s director and curator.

At one time home to the offices of the Vicksburg Convention and Visitors Bureau, the depot’s second floor became available when the VCVB moved to a new location on Walnut Street in July 2016.

The Board of Mayor and Aldermen Monday amended the museum’s lease to allow it to take over the second floor.

Benway said the former VCVB offices will be the new home for the museum’s collection of models of ships and boats named after Mississippi oR after regions in the state and the collection of Civil War gunboats.

Included in that collection will be models of the World War I and World War II-era battleships named Mississippi, and a model of the nuclear submarine Mississippi, which is under construction. Right now, he said, the offices are filled with display cases for the new move.

“The first floor will be devoted to our railroad models, and the models of tugboats will be moved to the room where the film is (the present location of the diorama),” Benway said.

He expects to begin moving exhibits sometime this week.

“We’re in the slow part of our season,” he said. “July is always a slow month. We rely a lot on the riverboats, and there aren’t many boats coming here in July and August. They won’t pick up again until late August.

“I’m looking for volunteers to help with moving, and with the elevator out, it’s going to take some time.” State officials ordered the depot’s elevator shut down as a safety hazard in April 2016. When it was in operation, the elevator had a habit of trapping people on the second and third floors because the doors jammed.

The city has received a total of $537,475 in Transportation Alternative Program grant funds to cover 80 percent of costs to repair problems at the depot, including replacing the elevator. The grant is a reimbursement grant, which means the city will pay for the work and be reimbursed.

A symbol of the 2011 spring Mississippi River flood, the depot was renovated and re-opened in 2011. After the building re-opened, the museum moved into the first floor, VCVB rented office space on the second floor, and Vicksburg Main Street rented space on the building’s third floor.

VCVB, Main Street and the museum evacuated the depot in December, during the winter Mississippi River Flood, when the river reached 50 feet and threatened the building. The

VCVB then left for a different building, and Main Street moved out of its offices in the depot and relocated in the City Hall Annex on Walnut Street.