Vicksburg golfers fall behind at Junior Am 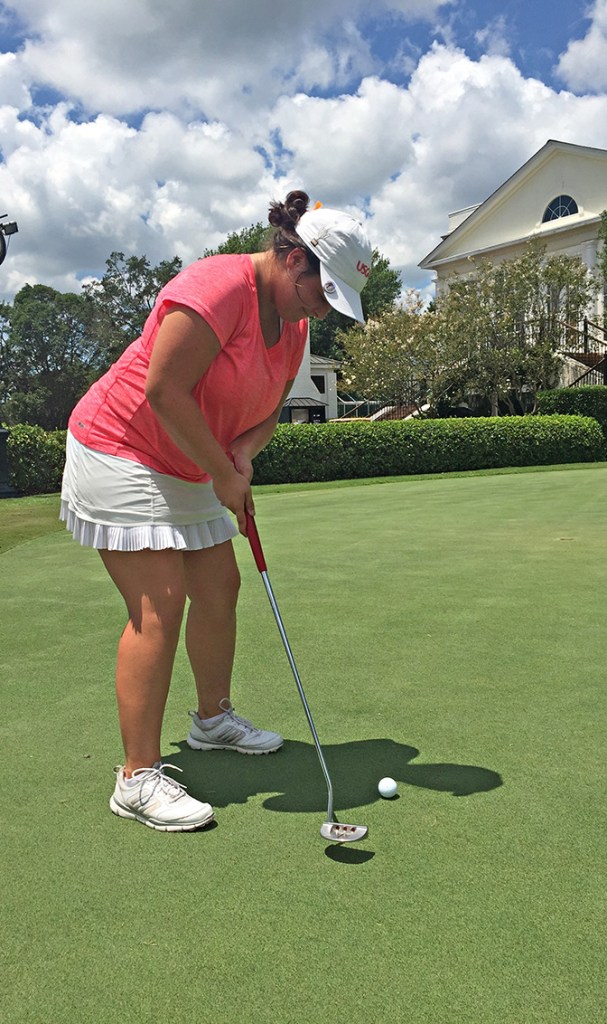 Vicksburg’s Karley Whittington practices on the putting green at Old Waverly before her round in the Mississippi Junior Amateur Golf Championship on Wednesday. (Traci Whittington/For The Vicksburg Post)

The Mississippi Junior Amateur Golf Championship turned into a runaway in round two, and those in the driver’s seat left Vicksburg’s best chances at a champion well behind.

Hunter Logan shot a 3-under par 69 on Wednesday to stretch his lead from four to eight shots in the boys’ tournament, while Presley Baggett opened up a 17-shot lead in the girls’ tournament heading into Thursday’s final round at Old Waverly Golf Club in West Point.

Lost in the breakaway were Vicksburg’s Channing Curtis and Karley Whittington, who could still end up with respectable finishes but are well out of title contention.

Curtis shot a 77 on Wednesday to settle in at 6-over par for the tournament, 15 shots behind Logan.
Curtis started on the 10th hole Wednesday and was 6-over at the turn. He rallied to make three birdies on the front nine — his first of the tournament — and was 1-under over the last nine holes.

Six golfers were at 1-under for the tournament, and five more were between them and Curtis. Curtis is alone in 13th place, and aiming for a top-10 finish when he begins his third and final round Thursday afternoon.

Whittington, meanwhile, shot a 77 on Wednesday and was in third place in the girls’ tournament — and hardly the only one being blown away by Baggett’s dominant performance.

Baggett, a Germantown High School senior and LSU commit, followed up her first-round 68 with a 69 on Wednesday to go to 9-under for the tournament. She’s birdied 13 of the 36 holes she’s played so far, and is the only one of the 16 golfers in the girls’ tournament under par at 7-under.

Baggett has also closed strong in both rounds. She birdied three of her last five holes in the first round, and three of the last four holes in the second.

Baggett’s stellar performance has all but locked up the tournament and set up a duel for second place between Mississippi State signee Blair Stockett and Whittington, the Warren Central senior.

Stockett was in second place at 10-over par 154, and Whittington in third at 12-over par 156. Sarah Johnson of Florence and Tristan Cooley of Sumrall were tied for fourth a 16-over.

Whittington, like most of the golfers trying to make their way around Old Waverly this week, has struggled to gain traction. The two-time MHSAA Class III champion had five bogeys in her first 14 holes Wednesday, and only has one birdie through 36 holes.

Among the other Vicksburg golfers competing in the tournament, Hartley Sullivan shot a 90 on Wednesday and Joshua Larsen an 88 to put them in 10th and 12th place, respectively, in the boys’ 12-13-year-olds’ division.

Sullivan is at 29-over par for the tournament and Larsen is at 34-over. Collins Trolio of West Point leads the age group at 2-over, two shots ahead of Patton Kincaid V and Wells Williams.

In the overall boys’ standings, St. Aloysius freshman Wilson Palmertree was in a four-way tie for 48th place, at 22-over par. He shot an 85 on Wednesday after opening with an 81, but did birdie three of his last four holes to head into the final round with some momentum.

Rebooting the brain with random thoughts