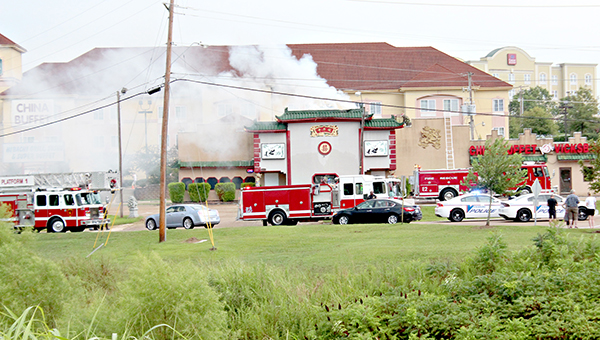 FIRE AT THE CHINA BUFFET: Smoke billows from behind the facade of the China Buffet restaurant, 4150 S. Frontage Road, Saturday evening. The fire occurred about 6:58 p.m. Chief Henry Williams said firefighters received a call about smoke and flames coming from the roof of the building. The cause of the fire is undetermined.

A Saturday evening fire damaged the facade and forced the evacuation of the China Buffet restaurant, 4150 South Frontage Road.

The fire occurred about 6:58 p.m. right after the area was hit by a severe thunderstorm producing heavy rain, lightning and gusty winds that soaked the area.

Vicksburg Battalion Chief Henry Williams said firefighters received a call about smoke and flames coming from the roof of the building, and when trucks arrived firefighters found two restaurant employees on the roof trying to extinguish the flames. The workers were replaced by firefighters who got the blaze under control and began dismantling the upper part of the facade.

The fire backed up traffic leaving the Outlets of Vicksburg, and traffic on Maxwell Drive was rerouted from its intersection with South Frontage.

The cause of the fire is undetermined, and the inside of the restaurant was not damaged, he said.

Bicyclists strive to create awareness for those with disabilities