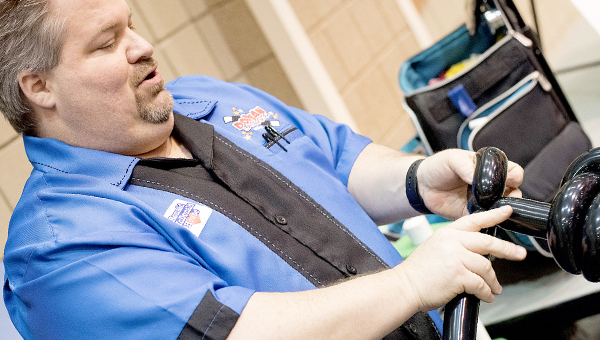 Magician Dorian LaChance, from Jackson, will perform two shows Tuesday at the Vicksburg Convention Center. The first show, at 10 a.m., will be for area preschool children. (File Photo)

The Vicksburg Convention Center will be the setting for a day of magic and fun Tuesday.

The VCC will be hosting two separate magic shows featuring Jackson-based performer Dorian LaChance. The first show will take place at 10 a.m. and is geared towards younger children, with more than 200 children from local daycares scheduled to attend.

“It is something fun for the kids to do during the day,” VCC executive director Annette Kirklin said. “We wanted to provide something to do in the nice cool building instead of outside where it is hot.”

LaChance has previously performed during the VCC’s annual Breakfast with Santa. He said both shows will be a mix of magic and comedy with fun for all ages.

“The daytime show more will be tailored to the elementary,” LaChance said. “More of the slapstick fun just lots of audience participation. The nighttime show will be more family oriented. There will be stuff for everybody, even the adults will enjoy.”

He added there will be no scary magic, such as sawing anyone in half. LeChance will also be joined by his friend Rocky the Raccoon, who will have a role in both shows.

The daytime show is expected to run about 45 minutes and the evening show will run about 55 minutes.

LeChance said to make sure you stay the entire time because, “There will be a finale to the nighttime show that people will not want to miss.”

This is the first time the VCC is hosting an event of this type and Kirklin said it is part of their celebration of 20 years in Vicksburg.

“It is something new and we are giving it a shot,” Kirklin said. “With our 20th anniversary, we are just trying to throw in something for community.”

Kirklin said they have already sold about 100 tickets for the evening show and, depending on how many are sold, they will decide if the show will be held upstairs or downstairs.