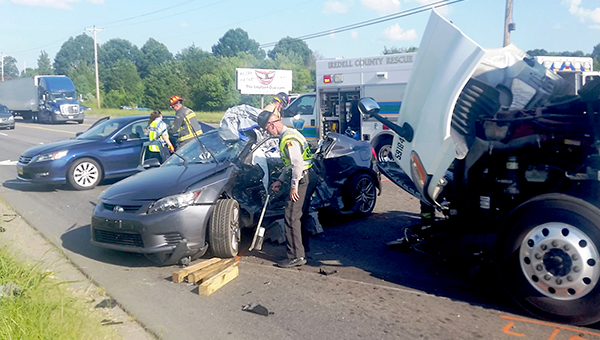 Amidst the tragedy, Williams’ family was able to find a modicum of solace through one final selfless act for a child who spent his free time repairing broken bicycles for the younger children in his neighborhood.

William’s mom, Ashley Peay, said she didn’t hesitate when doctors asked her if she would like her son to be an organ donor. She knew without a doubt that the answer was yes.

“As soon as they asked me, I already knew the answer to it,” Peay said. “Years back, [Williams’] older sister and D.J. were looking at my driver’s license and they saw the heart on it. They asked me what it was for and what it meant. Both of them thought it was the coolest thing in the world.”

The pain did not fade in that moment, but Peay said knowing her son’s death would enable others to live through his organ donations “helps a little.”

“We actually can meet the recipient if they agree to it,” Peay said. “We do get to know more about them. They did tell us it could be 30 to 60 days before we know anything.”

Peay said if given the chance, she would like to meet those who her son was able to help.

Williams was born in Vicksburg and moved with the rest of the family to Pensacola, Fla., three years ago. The family again moved just two months ago to North Carolina.

The move came with a major drawback for Williams. He wasn’t particularly interested in school Peay said, but the later end to the school year in North Carolina forced him to finish the year in Florida and then reenroll for a little extra school once the family moved.

Williams much preferred riding his bike through the mud and honing his mechanical skills.

“He used to fix a lot of bikes in our neighborhood for all the little kids around there,” Peay said. “He loved working on cars. That was definitely his dream.”

Williams died from his injuries two days after a car he was riding in along with four other people, including Peay, was struck on the driver’s side in Statesville, N.C., on July 14.

North Carolina Highway Patrol Trooper K.D. Allred reported that none of the passengers in the car were wearing seat belts at the time of the collision. Williams was seriously injured in the accident.

The remaining passengers were transported to the hospital, but all were released within a couple of days Allred said.

Allred said the vehicle Williams and Peay were riding in, driven by Daniel Chase Bowlin, made a right turn onto US-70 east in Statesville from State Road 2354, where they were traveling north.

When he made the turn, Bowlin forced a tractor trailer that was traveling in the right hand lane to swerve to avoid colliding.

Bowlin then made an illegal u-turn into the path of the tractor trailer that had previously swerved to avoid the car causing the fatal accident, Allred said.

Bowlin was later charged with misdemeanor death by a motor vehicle and violation of the child restraint law following the accident.

He was transported to Iredell County Jail before being released on a $20,000 unsecured bond. His next court appearance is scheduled for Sept. 20.

Williams was transported to Wake Forest Baptist Medical center where he died July16. William’s funeral was held Monday at the Glenwood Chapel in Vicksburg and he was laid to rest at Cedar Hill Cemetery.