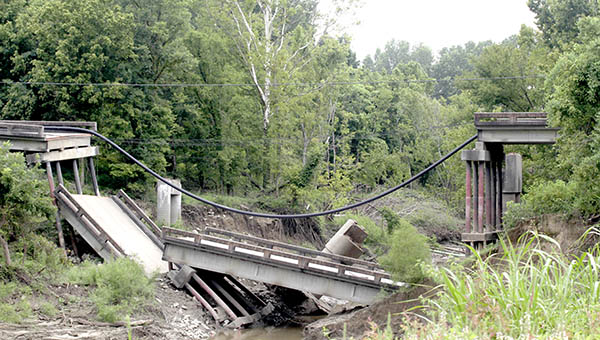 “It could happen at any time.”

Kemp Bottom Road is the main route to Entergy’s Baxter Wilson power plant, with the bridge being the only structure offering a path over the Hennessey’s Bayou. That route was cut off earlier in the week, as officials closed the bridge.

“We got the engineers down to look at it and they said, ‘It’s moved and its dangerous, and you’ve got to close it,’” he said.

The collapse of the bridge does not affect plant operations.

Entergy’s Sheila McKinnis said after the bridge was closed, that Entergy was operating normally and had other access points into the power plant.

“We’re operating normally, it’s just that our access to the building has changed.” McKinnis said. “We have a temporary access. Entergy’s controlling access to the plant for employees and authorized visitors, and we are building a permanent access road to the plant that is expected to be completed by August.”

The problem with the bridge dates back to the 2011 flood of the Mississippi River.

Engineers said the water entering the Bayou during the flood and then receding quickly created the erosion problem faced today.

“It’s bigger than what we were expecting,” Vicksburg Mayor George Flaggs Jr. said Friday. “We were just planning on going in and fixing the small area around the bridge but thankfully we didn’t; it would’ve been a waste of money.” He said the city cannot move forward with the repairs until the U.S. Army Corps of Engineers has a chance to examine the area.

Flaggs also said he has been in contact with Vicksburg Fire Department Chief Craig Danczyk to make sure that the access road is safe enough that they are able to access the plant in case of an emergency.