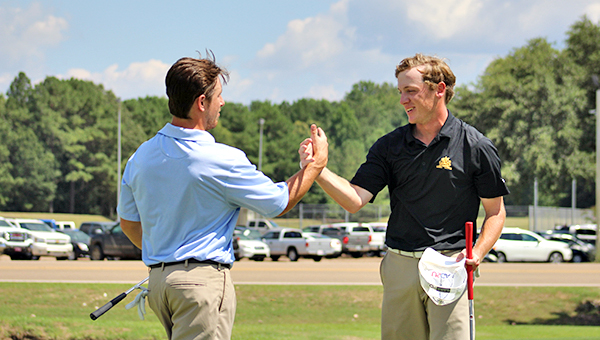 While the recent St. Aloysius High School graduate won his share of high school tournaments and did well at state and regional junior tournaments, his hometown title always seemed to elude him.

He fell out of contention after making the championship flight in 2014, finished third in 2015 and second in 2016.

Finally, in 2017, the stars aligned and he left Clear Creek Golf Course with a glass jug and a smile a mile wide.
Curtis shot a 74 on Sunday, the lowest round of the day, and took advantage of a late bobble by runner-up Parker Rutherford to win the Warren County Championship by two shots. It’s the 18-year-old Curtis’ first Warren County title — he’s won the Clear Creek Club Championship the past two years — after several agonizing near-misses.

“It’s awesome,” Curtis said. “Not a day goes by, from the time high school golf ended till now, every single person that walks in here is like, ‘Are you going to give them a run at the Warren County?’ It’s just so awesome to actually do it.”

The tournament’s outcome swung on a three-hole stretch from Nos. 15-17. Curtis took the lead on 15 with a par while Rutherford made bogey, and then birdied No. 17 as Rutherford two-putted for another bogey.
The swing on 17 gave Curtis a three-shot lead heading to the final hole. He two-putted for a bogey on 18 to give one back, but tapped in the follow-up to clinch the victory.

“I was shocked. I didn’t even think anything about it. I thought he’s already made par and it’s over. I’m looking at one shot here and going to 18 with two shots (lead),” Curtis said. “Then I saw that and was kind of like, ‘Wow.’ I hated it for him, but you can’t really do anything about it.”

Curtis shot a 69 on Saturday to tie Jeff Harpole for the first-round lead, while Rutherford and Nick Mekus were each one shot back.

Harpole fell out of contention by shooting 6 over par on the front nine Sunday. He finished at 150 for the tournament, seven shots behind Curtis in fourth place.

Mekus, the 2016 County champion, started Sunday with two bogeys and a double bogey on the first three holes but somehow managed to stalk the leaders until late in the round. He was only three shots back when he hit his second shot into the woods near the 16th green. It took him two chips to get out, he wound up making double bogey, and was knocked out of contention. He finished third, at 148 for tournament.

The struggles of Harpole and Mekus made it largely a two-man race between Curtis and Rutherford. They were tied at the turn, Rutherford briefly took the lead when Curtis bogeyed the 11th hole, and then were tied again when Curtis birdied the 12th while Rutherford made par.

The two leaders remained tied until the 15th. Rutherford missed a par putt and settled for bogey while Curtis made par, giving the latter the lead back in their duel on the back nine.

Rutherford made a great par save on the par-5 16 to stay one back. His tee shot went into a ditch, but he was able to navigate the rulebook to receive a favorable placement back on the edge of the fairway. After his second shot landed under a tree, he punched an iron to the edge of the green and got up and down for par.

Curtis missed a birdie putt on top of it to keep Rutherford in the mix.

“Sixteen, I usually really like that hole. I pulled it off the tee box a little bit and went through that whole shenanigans where I took relief from the path and the ground under repair and finally got it in a playable spot,” said Rutherford, who won the Warren County Championship in 2015. “I had decent yards with the hybrid. I hit a poor shot and hit it into the trees. I somehow made par from there.”

Rutherford’s missteps on 15 and 16 were the set up for the turning point of the match on the 17th hole.

Curtis hit a 50-yard bump-and-run approach shot from near the cart path to within three feet of the hole, and knocked in the putt for a birdie. Rutherford, trying to keep the margin manageable as time grew short, missed his par putt for the decisive swing.

“I got aggressive with it and hit a poor, short putt. It was over after that,” Rutherford said. “I was trying to make my approach on 18 and it wasn’t even close. As you can see, the execution is what the issue was all day.”

Both Rutherford and Curtis said a late change to the 17th hole played a part in the outcome.

The blue championship tees are usually set up — and were on Saturday — at the base of a large hill that requires golfers to not only hit the ball far off the tee but to curve it around a wooded area at the top of the hill. It’s a treacherous shot capable of leading to a lost ball and a large shift in the leaderboard.

On Sunday, however, the blue tees were set up at the top of the hill, at the same location as the easier regular or white tees. The tee shot from there leads straight onto the fairway.

Clear Creek pro Kent Smith said the switch was made because of some large trees along the hill that made the shot too difficult, but golfers were not informed of it before the round.

As they drove up to the normal location of the 17th tee box, all members of the final foursome expressed confusion as they continued to the top of the hill. The different — and easier placement — also forced them to quickly adjust their strategy and mental approach.

“I’m kind of looking forward to the tee shot from the blues, but they weren’t down there, so it changed how I had to address the situation mentally because the tee boxes were in a different place,” Rutherford said. “We were all surprised. That’s usually such a pivotal point in the round. I was really surprised, and a little disappointed. I tried to reload and hit a good shot and have the right mindset. I just didn’t execute. Channing executed better than me. Most of the day he did. I played OK. I didn’t play poorly. I just didn’t play good enough, is what it came down to.”

Curtis, meanwhile, breathed a sigh of relief when he realized he didn’t have to navigate the 17th hole’s normal layout.

“It’s one of the hardest holes out there if the tee is in the bottom,” Curtis said. “I had it in my mind that I need to leave myself room to make bogey, and then we got there and it was up on top and I was like, ‘Thank you.’”

While the tee placement affected both of the leaders, it was ultimately some clutch shots by Curtis that defined the day. He hit several excellent chips and approaches throughout his round — including one on No. 14 that hit the flag stick and set up an easy par putt that kept him tied for the lead — and was able to use it as a weapon when it mattered most.

“That 9-iron today was definitely what pulled me out. I hit it on 14, and then hit the bump-and-run with a 9-iron on 17. Both of them hit up there tight, and were monumental. Those were the shots that won it,” Curtis said. “I didn’t hit it bad, but I didn’t hit it good, so the key was keeping it in play. It was one of those days where you just have to scrap it around, make pars and see where you’re at for the last few holes, and that’s what I did. I had good situations on 16, 17 and 18, and that’s all from scrapping it around.”

In the tournament’s consolation flights, Kevin Neihaus shot a 79 on Sunday to win the First Flight with a two-round total of 160. Bubba Ward was second, at 164, while Hunter Simrall and Herby Poole tied for third at 165.

Keith Ehrhardt shot a 167 for the tournament to win the Second Flight. Austin Ledbetter and Jay Prince tied for first place in the Third Flight at 175. 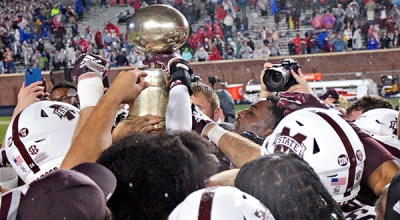