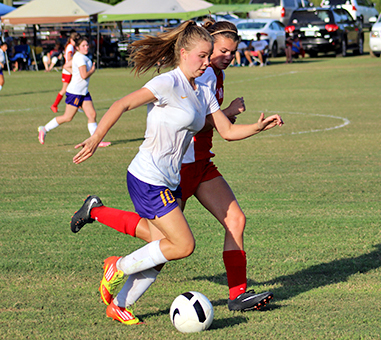 It’s not often that a team enters a season with both championship aspirations and a rebuilding plan, but that’s where the St. Aloysius girls’ soccer team is at right now.

The Lady Flashes only have one senior and two juniors on the roster as they try to get back to the lofty heights of their 2015 state championship season. The rest of the team includes nine sophomores — some of them returning starters.

The odd split of experience and talented youth has coach Scott Mathis as excited about this season as he is about the future.

“I’ve got 10 10th-graders. So imagine what their senior year is going to be like,” Mathis said.

Their sophomore year got off to a bit of a rough start. Madison-Ridgeland Academy beat the Lady Flashes 4-1 in the opener Monday in Bovina. Anna Kathryn McDaniel, Hunter Thompson, Mary Rogers Coon and Lacy Lockey each scored goals for MRA, which netted two in each half.

St. Al didn’t find the net until the 69th minute, when Mary Ranager tapped one in off a scrum in front of the goal following a corner kick by Madelyn Polk. Several scoring chances followed, but four shots went high or wide.

“It’s a good start. I didn’t see a lot of what I needed to see in the first half. I haven’t had the whole team to even practice. So it was good to be able to see what we possibly have,” Mathis said. “But I don’t have depth. I know that for sure. That’s one thing we don’t necessarily have to have in this league, but if you’re not in shape and you don’t have depth, what happens? You get beat 4-1.”

Among the things Mathis does have is a couple of bonafide scoring threats in Polk and Ranager, and a couple of other returning starters in goal keeper Cameron Mathis and midfielder Anna Beauchamp.

The sophomore Polk had 17 goals and 25 assists last season and has led the team in scoring each of the past two seasons. Ranager, the team’s only senior, tallied 15 goals and 10 assists in 2016 after missing the previous season with a torn ACL.

“We are really young, but we have some good players,” Ranager said.

St. Al won the MAIS Division III championship in 2015, but a couple of district losses kept it out of the playoffs despite an 8-3 record in 2016.

The MAIS’ latest realignment moved perennial power — and rival for the past two seasons — Hartfield Academy up to Division I and out of St. Al’s district. Hartfield beat St. Al twice last season, after St. Al swept three games between them in 2015. One of the 2015 victories was in the state championship game.

The removal of Hartfield leaves St. Al and Park Place as the lone superpowers in District 3. Scott Mathis said the road to the playoffs appears clear, so he beefed up the non-district schedule to help the Lady Flashes improve.

The 15-game regular season schedule includes matchups with MRA, Jackson Academy and Cathedral in addition to eight district games. The next game is Tuesday at 5:30 p.m., at home against Cathedral. St. Al plays its home games at Strickland Field in Bovina.

It’s a trial by fire, but one Mathis hopes prepares them for the better teams they’ll see in the postseason.

“None of the teams we play this year are going to be anything like (MRA),” Mathis said. “But I figure the only way we’re going to get better with the young team that I have is to show them people like this, get them around them, and let them drum us or let us stay in the game.”