‘Crazy For You’ opens Friday 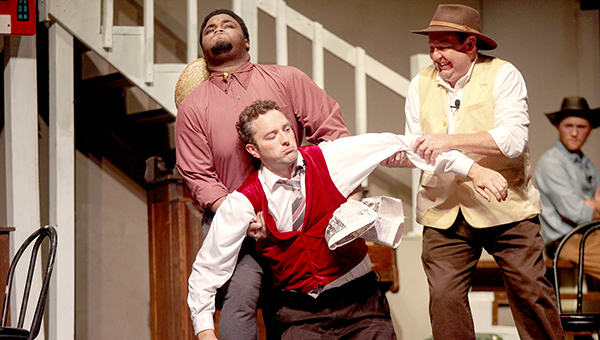 Performers in the upcoming production of “Crazy For You” practice Tuesday night at the Parkside Playhouse Theatre, 101 Iowa Ave. “Crazy For You” is based on the 1992 adaptation of a previous show written and composed by George and Ira Gershwin and includes musical numbers, “Embraceable You,” “I Got Rhythm,” “Can't Take That Away From Me,” “Someone to Watch Over Me, and “Krazy For You.”(Courtland Wells/The Vicksburg Post)

Get ready for a night of singing and dancing when the Vicksburg Theatre Guild presents “Crazy For You.”

“Bobby, who is an aspiring talent, is looking for his break on Broadway while working at his mother’s bank,” director of the musical comedy Paul Ballard said.

But when Bobby is sent to Deadrock, Nev., to foreclose on an old theater he finds an opportunity to fulfill his dreams.

“This is a classic chain of boy meets girl, boy falls in love, boy loses girl, and they get together in the end,” Ballard said, but with a lot of classic tunes performed throughout the show.

Some of the musical numbers include “Embraceable You,” “I Got Rhythm,” “Can’t Take That Away From Me,” “Someone to Watch Over Me, and “Krazy For You.”

The show is based on the 1992 adaptation of a previous show written and composed by George and Ira Gershwin,” Ballard said, which was written in 1930 with the title “Girl Crazy.”

“This version of the show has a few changes in the story line but the same Gershwin tunes. ‘Crazy For You’ also reflects the kind of songs and dancing that Fred Astaire and others made popular in that era,” Ballard said.

Because “Crazy For You” also has a lot of dancing incorporated into the show, in addition to holding auditions for vocalists, Ballard said he had to seek out dancers.

“To recruit dancers we contacted those who have been associated with other shows recently including “Mary Poppins” and “Gold In The Hills” to gauge their interest and availability and then reached out to others from there,” he said.

Ballard said he decided to offer up “Crazy For You” as a VTG main stage production after seeing it in Hattiesburg in the late 90s when former Vicksburg resident Brady McKellar was part of the University of Southern Mississippi cast.

“I knew then that if I could ever identify a male dancer/singer who could do the part, I wanted to direct the show for VTG,” Ballard said.

And during the VTG’s 2015-16 season when Jon Brame was cast as Bert in the theatre’s production of “Mary Poppins,” and showcased his vocal and dance ability on the stage, Ballard knew he had his lead.

Cast as the female lead for the show is Genevieve Walker as “Polly Baker.”

Baker has performed in previous VTG productions, Ballard said, and she is also a Can Can dancer for the Guinness Book of World Records’ longest-running show, “Gold in the Hills.”

Ballard said “Crazy for You” is a “charming story that is appropriate for all ages.”

“Anyone with children taking dance or grandchildren should come.

“And everyone will find the scene of double identity to be the funniest ever, Ballard said.

Tickets are $20 for adults, $15 for ages 65 and older and $10 for ages 12 and younger and are available at showclix.com/event/crazy1 and at the box office.