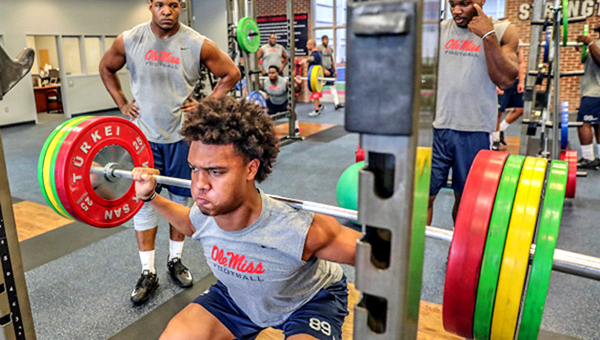 Preseason camp began on Wednesday and actual football games are on the horizon. Now the Rebels are trying to shake a steady cascade of bad news and produce a decent season.

Ole Miss quarterback Shea Patterson doesn’t mind acknowledging that there were times during the offseason — especially in the days following the stunning resignation of coach Hugh Freeze last month — that it was easy to wallow in self-pity.

But the time for that has passed.

“You can’t be a baby about it, you’ve got to grow up,” Patterson said. “You still do your job. This is a job and it affects people’s lives. I think everyone has a mindset of working hard.”

Ole Miss does have some reasons for optimism now that preseason camp has started. Patterson — now a sophomore — had a promising debut during his three-game cameo as a freshman. The offensive line has several veterans and a talented group of receivers, including A.J. Brown, Van Jefferson and D.K. Metcalf, could be among the best in the Southeastern Conference.

The defense is a little less settled after having a rough season in 2016. But veterans like defensive linemen Marquis Haynes and Breeland Speaks, along with linebacker DeMarquis Gates, provide a solid foundation.
For now, the focus is back on the field.

But the potential for distractions remain everywhere:

• Freeze’s shocking resignation continues to fester. The school found a “pattern of personal misconduct” after phone records revealed that the coach had made at least one call to an escort service in 2016. The school hasn’t released Freeze’s full phone records, but is expected to in the future.

• Ole Miss is still dealing with an NCAA investigation into rules violations that has lasted nearly five years. It’s likely that the final ruling in the case will happen sometime during the season. The Rebels have already self-imposed scholarship reductions, recruiting restrictions and a one-year postseason ban for this season. More punishment could be coming.

• Then there was a fresh problem on Wednesday: Cornerback Ken Webster and linebacker Detric Bing-Dukes were arrested and charged with shoplifting on Tuesday. Interim head coach Matt Luke suspended the pair for the season opener against South Alabama.

“Nobody’s perfect, we all make mistakes,” Luke said. “But when we do cross a line, there’s accountability. There’s a price you have to pay.”

Luke’s straightforward approach to the discipline could be a window into how he’ll run the team this season.
Patterson said Luke’s leadership has come naturally because he was already so involved in the day-to-day preparation. He was a co-offensive coordinator before being elevated to head coach after Freeze’s resignation.

“We were already used to following him,” Patterson said. “He was already a leader on this team before he became the head coach.

“That’s what we’re excited about — he’s someone we know we can go follow into the storm. We know he’s going to go lead us and give us his all, so we’re going to give our all to him.”

Brown — who caught 29 passes for 412 yards and two touchdowns last season — said people outside the program might be surprised at how little the tumultuous offseason has affected the team.

“We’re here to play football,” Brown said. “All the other stuff, we don’t care about it.”

The sad, sad tale of a flag football washout