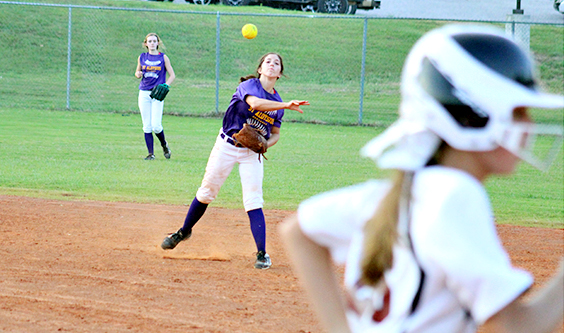 St. Aloysius shortstop Jordan McDonald throws to first base as a Hartfield Academy’s Amberly Aultman runs down the line in the fifth inning of Thursday’s game. (Ernest Bowker/The Vicksburg Post)

New St. Aloysius softball coach Jack Lott believes his program can have a bright future. The present, however, appears a bit bumpy.

The Lady Flashes have lost two of their first three games this season, including a 15-0 defeat at the hands of Hartfield Academy on Thursday. They also gave up 21 runs in the season opener against Benton Academy.

A combination of errors and walks — a total of 22 and 29, respectively, through three games — have been the team’s biggest downfall. Lott, who took over this summer after Candice Reeder stepped down, said a lack of pitching depth and practice time have contributed to those issues.

“We’re not very good right now. There’s a lot of reasons for it, but I don’t want to make excuses. We’ve got what we’ve got,” Lott said. “We needed more time to prepare for the season, and we just didn’t have it. We had a lot of rain and stuff, and a lot of other teams did too, but we came into the season with no pitching. If you don’t have a pitcher, you have problems — real big problems.”

The Lady Flashes haven’t had a consistent pitcher since the spring of 2015, their last season in the Mississippi High School Activities Association. Seventh-grader Stephanie Schoonover helped the team reach the Class 1A semifinals, and then moved to Alabama the same summer.

Schoonover has emerged as one of Alabama’s best high school pitchers, and St. Al has been struggling to replace her. The move to the Mississippi Association of Independent Schools in July 2015 threw off the schedule for training Schoonover’s successor and St. Al has only won two games in the past two-plus seasons.

Lott has recognized the lack of a steady pitcher as a glaring hole and is doing his best to patch it. Four players — Brooklyn Richards, Brantlee Richards, Jordan McDonald and Emme Eaton — have seen time in the circle so far.

Lott said several other players are likely to pitch before the end of the season, but have been limited by injuries.

“We’re trying to pitch by committee, and let everybody pitch in. We can do that when we play good defense, but our defense has let us down in two of the three games. That was supposed to be a strong point,” Lott said. “We need to work more on our defense, get our timing down, and get some confidence. We’re going to have to play our way through this to get better because we don’t have the practice time to do it during the season when you’re playing two or three games a week.”

To help the Lady Flashes play their way into shape, Lott beefed up the schedule. They’ll play 21 games and three one-day tournaments this season, twice as many games as last year

Up next is the first tournament of the season, Saturday at Indianola Academy. St. Al will also host Rebul Academy, which it beat last week, Monday at 5:30 p.m. at the Betty Hearn Softball Complex.

“When I look at the teams who are traditionally good and compete every year, they don’t play just what’s required. They play a lot of ballgames,” Lott said. “You’re going to take a lot of beatings when you’re not very good, but the more you get out here and the more you play and are exposed to the game and game situations, you’re finally going to get better. So we’re going to play all kind of different level teams.”

The key to making it through, Lott added, was patience. He believes the Lady Flashes will have their share of successes this season, like their 11-5 win over Rebul last week. Those will come from playing well, however, and until the team can do that consistently it will be an uphill run.

“Any time you win, it helps,” Lott said. “But we didn’t throw the ball around the second game like we did the first game or (against Hartfield). Some of our best players were dropping balls and it snowballed, and that can happen. Then you say, ‘Here we go again.’ We’ve got to break that mold. And we will. It’s just going to take some time.”