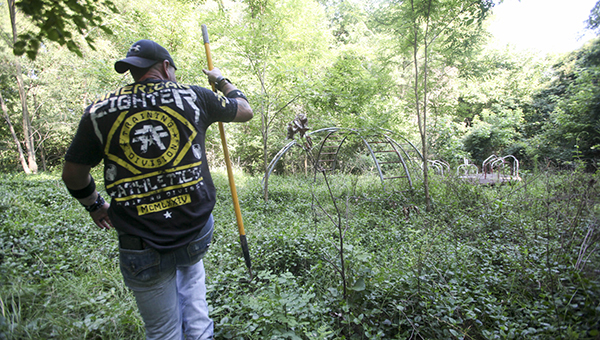 Tucked back in the woods, the park has been forgotten for years.

A barely discernable trail starting at the parking lot of New Mount Elem Church on Wisconsin Avenue leads through the undergrowth and under trees to this forgotten park.

A small playground with two swing sets, a slide, jungle gym and a merry-go-round comes into view in a small clearing at the end of the trail. Most of the swings are missing, but one tire swing remains, waiting for children who will never come.

David Childers rediscovered the playground in 2014 while following up on rumors he had heard and looking for paranormal activity with his Mississippi Paranormal Research Institute.

“I heard some stories about it. I came down to take some photos. People have said it is haunted and creepy looking,” Childers said.

In the three years since, he has been a consistent presence at the park whether searching for ghosts, working to clean it up or even having a picnic with his daughter.

There was even that time, on his second visit to the site, when he saw what he swears wasn’t a bear or a man, but won’t quite call Bigfoot.

“It does have paranormal activity here,” Childers said. “That is why I come out here and do investigations. I have picked up some cool stuff. I will come out just to take photos. I bring my kid out here.”

Despite the time he has spent at the site, even Childers is sketchy about its past. He thinks it was built in the 1950s and maybe shut down in the 1970s after it became a hotbed for crime.

Even with the stories of ghosts and maybe Bigfoot living nearby, the biggest mystery of all might be who exactly owns the site.

The park is situated on what was once Vicksburg National Military Park property, but years after it was closed and forgotten, no one quite knows whose land it is.

“I thought it was road right-of-way property, but my boss (Garnet Van Norman, city public works director) said, ‘No, it is old park property from when Confederate Avenue and all that belonged to the park,’” Tim McCarley, city GIS mapping specialist, said. “The park gave maintenance of the land to the city. I don’t know who the actual ownership falls back on, but the city maintains the mowing of Confederate Avenue rights-of-ways.”

“It has been over 20 years since that park was even thought about,” Graves said. “It has not been used.”

Representatives with the military park say it has been city property dating back to the 1960s, though.

“Those are the former parklands that were transferred to the city in the 1960s,” Scott Babinowich, VNMP chief of interpretation, said. “That was the transfer where the whole lower third of the military park was given to the city and they rerouted Confederate Avenue and built the road Mission 66.”

It has been lost for decades, and the ownership is unknown, but those who grew up in Vicksburg can still remember the park. Former mayor Joe Loviza said he can remember playing at the park when he was younger, although he can’t remember when it was built or closed.

Alonzo Stevens had forgotten about the site, but the mere mention of it brought back a flood of memories of days spent playing on the slide that now ends in thorns, and the jungle gym that is rusted with age.

Like Loviza, he said he has no idea when it was built or closed.

On many of his trips to the playground, which he tries to take at least once a month, Childers brings along his paranormal detection gear. But on this day he has only a hoe, “for snakes” he said, as he walks around the site. He makes his way over to the merry-go-round and gives it a pull.

Despite the years of neglect, round and round it goes.

“I try to come down once a month to check on it and make sure nobody has come in here and tried to vandalize it or steal one of the swings like they did,” Childers said. “It is a piece of history in Vicksburg, a great landmark and I wish it was upkept looking.”

“You are going to make me go back there,” Stevens said. “That is old. I haven’t been back there in years. I’m going to have to get me a stick or hoe and go back there and look at it.”