Flashes get out the jitters with scrimmage 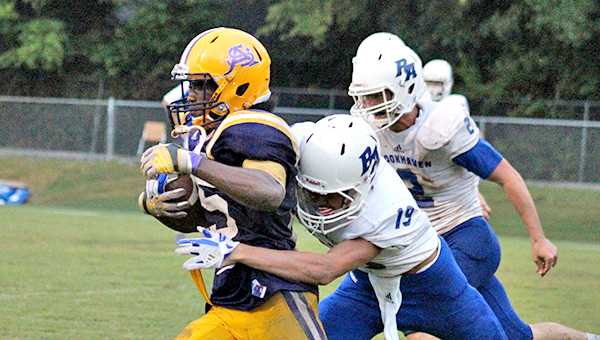 For 20 plays Friday night, St. Aloysius’ first-team offense kicked nothing but mud and themselves. Turnovers, nerves, and the sloppy field conditions created by a pregame rain squall kept the unit in check as they tried to get their footing in a preseason scrimmage against Brookhaven Academy.

Plays 21 through 30, however, made all of the frustration wash away.

Quarterback Antonio Thompson threw two touchdown passes and ran for another as St. Al scored three times on its third set of plays. The defense held Brookhaven scoreless for the entire scrimmage, and the Flashes passed their first on-field test of 2017.

“We pretty much got out of it what we wanted to get out of it, except we had one major injury,” St. Al coach Michael Fields said. “Defensively, we got after it. We put those shoulder pads on them. I was proud of that. And then that third drive, offensively, we scored three times in 10 plays and I felt pretty good about it.”

The one injury was an apparent separated shoulder suffered by junior wide receiver/defensive back Preston McGowan. It, as any injury will be this season, was a big blow for the Flashes. They only have 20 players on the roster in grades 10-12.

The extent of McGowan’s injury was not immediately known, but the low numbers on the roster mean depth and conditioning will be a factor all season. Players appeared gassed in the muggy conditions Friday night, and Fields said some of the fatigue was caused by the emotions of being on the field for the first time.

“Sometimes you can get tired just by being emotional. On the third drive, you could see we settled down and looked a little bit more fluid,” Fields said. “I think the conditioning part is going to be OK. We still have a depth problem, but hopefully we’ll be able to find some younger kids that we’re going to be able to plug in and give somebody some breaks here and there.”

Unofficially, St. Al won Friday’s scrimmage 21-0, but no score was kept. In fact, the scoreboard wasn’t even turned on. Each team ran four 10-play series starting at their own 40-yard line, with the ball returning there following scores or turnovers.

St. Al’s only scoring threat on the first two series was a 40-yard field goal attempt by Conner Smith that missed wide right. Thompson also fumbled a high shotgun snap that resulted in a turnover.

On series No. 3, the Flashes kicked it into gear. Thompson broke two tackles on his way to a 60-yard touchdown run for the first score of the scrimmage. Ketrez Brown then took a swing pass and duplicated Thompson’s feat, breaking four tackles before diving just across the goal line for a 25-yard touchdown.

For the finale, Thompson threw a 23-yard touchdown pass down the middle of the field to Evan Fedell. Smith hit the PATs after all three touchdowns.

“I think they got the jitters out and cut down on mistakes. We moved the ball on the other drives, but we had turnovers and they put the ball back. I think that’s getting the jitters out,” Fields said. “That’s why I said this scrimmage would give us a little bit more, because we have a chance to come back and fight through our mistakes, whereas in a one-quarter scrimmage if you screw up you don’t get a chance to make up for the mistakes and you leave on a sour note. So this way, we leave on a good note.”

Thompson echoed his coach, saying it took a while for everyone to get used to the wet field and the feel of the game again.

“I think I just got used to the elements,” Thompson said. “The first and second drive, I wasn’t in it mentally. The third, drive, I kind of got there. It feels good because I know I can do it. I know all the work is paying off, and if I keep going in this direction it’ll be a bright path for me.”

St. Al turned the fourth series over to the junior varsity. The offense moved the ball inside the 30-yard line on one occasion before turning it over on downs, and did not get any closer to the end zone — but neither did Brookhaven. The JV defense kept the Cougars out of the end zone to preserve a very unofficial shutout.

Senior defensive end Jaylen Whitaker said there was still plenty to work on, however, before the season begins in two weeks.

St. Al will play River Oaks and Claiborne Christian in a jamboree at the University of Louisiana-Monroe this Friday, and then opens the season Aug. 18 at home against Leake Academy.