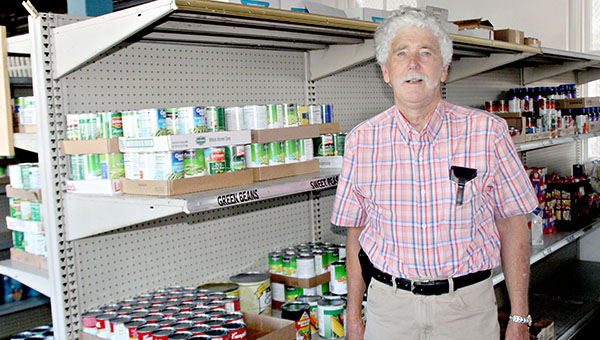 STOREHOUSE VOLUNTEER: Jimmy Turner volunteers his time working at the Storehouse Community Food Pantry, delivering meals on wheels for Crawford Street United Methodist Church and working with the church’s Service Over Self program.

When he first retired from the oilfield business after 32 years, Jimmy Turner was hanging around his house looking for something to do.

“I fooled around for about a year, just goofing around the house doing ‘honey-dos,’ and then I just started volunteering,” he said.

The inspiration came eight years ago from someone working at the Storehouse Community Food Pantry.

“I had a friend, Mr. Hugh Green, who asked me if I would come and help,” he said as he sat in the food pantry. “I started coming here at his request. He had to haul a lot of food and stuff in his truck, and so I came to help him out, and I’ve been here ever since. Me and Mr. Hugh called ourselves ‘the mules.’

“We did a lot of picking up and bringing it in here and setting it up.”

He said some of the donations for the food pantry come from area churches.

“Some churches bring it here if they have somebody,” he said. “Most of the time, if they get it they call us and we come and get it. We also have the mail carriers; they have their drive once a year, the schools have a drive, and we have different people bringing in food from donations.”

When people come in for food, he said, they have to present an ID and a Social Security card. They are interviewed, their names are entered into the pantry’s computer and the staff determines their needs.

The pantry, he said, provides enough food for meals for one person or a family for three days, adding meals are packaged for single clients and larger families.

Turner said working at the pantry “is great. I work on Wednesdays from 10 a.m. to noon. We have slow days; we have some days when we are just overwhelmed, and some days we don’t get but five or six (people), but most the time we stay pretty busy — it’s just kind of a steady flow.

He said he was happy to volunteer when Green approached him, “Because when I came up everybody was poor, and I know how it is when you’re running low on food and how bad it was. I wanted to do something to give back to help the community, and I enjoy it with the people I work with and I enjoy meeting people.”

Turner said he likes to talk with the people who visit the pantry.

“Everybody picks at me; I like to talk with people, and those who are down and out, I talk to them a little more; some of them ask me to pray for them, and I tell them I will.”

Some of the people coming to the pantry, he said, “are pretty down and out,” and he tells them he’ll say a prayer for them.

“I try to say a prayer for everybody we serve, especially the ones who are down and out,” he said.

“We meet a lot of cases here; some families are in pretty severe shape and they can use a kind word, and I believe I can make somebody’s day by talking with them for 30 minutes.”

He said his conversations receive a good response from people.

Besides working at the food pantry, Turner also delivers meals on wheels from Crawford Street United Methodist Church. He said he and other church members deliver about 30 to 33 meals each month in the area.

“The ladies cook it up and make it up. It’s ready to eat,” he said.

He said the deliveries are “something just to help people. I don’t do much, but I give it all I’ve got. I’m not particular if I can help people.”

He also works with Crawford Street’s Service Over Self program, a weeklong summer volunteer program involving adult and teen volunteers who repair and refurbish homes of people who otherwise couldn’t do it.

He said he used to work with the teens, “But now, I’m what they call a ‘runner’ for the program. I have two sites. When they need materials, I go and get them. I think I went 560 miles during the five days. That truck did not stop.”

Turner said he enjoys helping people because “I think that’s what we’re supposed to do; help our fellow man. That’s what I do it for. I believe that’s what the good lord wants me to do; help somebody else out. It may not be much, but if everybody would pitch in and help — just a kind word sometimes will go along way.”

“I loved that ride,” he said. “I had no idea that they elected me, and I was overwhelmed. It brought tears to my eyes. I told my wife I couldn’t run for dogcatcher and make it.

“It’s been great. I loved it, it’s been fun, and I’m the first Mardi Gras king of Warren County. I loved it.

“My family back in Monticello, Mississippi, think I’m the coolest thing in the world. My family’s done got letters and calls wanting autographs.”