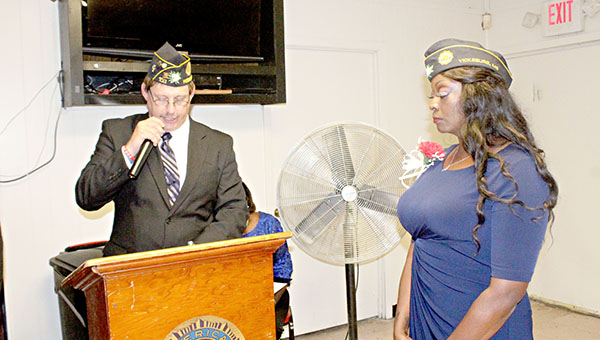 Sunday afternoon Michelle Stewart took her gavel and her place in the history of American Legion Tyner-Ford Post 213 as its first female commander.

Stewart, a retired Marine gunnery sergeant, and the other post officers took their oaths of office during ceremonies Sunday at the post.

Officers for the post’s Ladies Auxiliary and the Sons of the American Legion were also sworn in.

“I feel wonderful,” she said as she waited for the ceremony. “I see this as my opportunity to continue doing things for our veterans and service men. I’m grateful my comrades had the confidence in me to vote me in.”

Stewart has been a member of the post for three years, and is a public affairs specialist with the U.S. Army Engineering Research and Development Center.

“I stand here honored by your trust and inspired by your charge,” she told Legionnaires after her installation.

“We look around us and see Legionnaires spending time sitting here, but this is not who we are. Who we are is an organization that supports veterans and promotes patriotism and citizenship.

“I have a vision to seek out and take care of our veterans and their children and their widows, and to increase comradeship.”

Stewart said she wants to get more veterans involved with the post.

Drawing on former President Theodore Roosevelt’s “Man in the Arena” speech, which pays honor to the individual who faces challenges and confronts them, Stewart told the group, “I am the man in the arena; who will join me?”