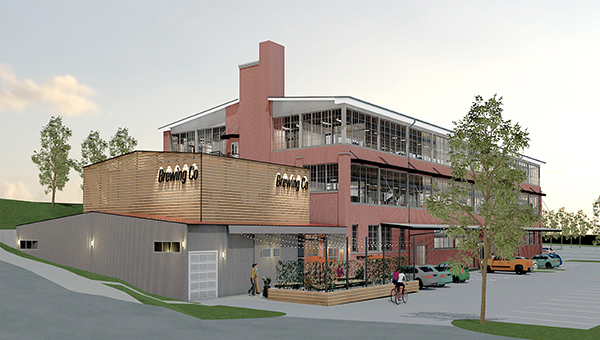 Above is an rendering of what planners hope the renovated Mississippi Hardware building will one day look.

Developers involved with the renovations of the old Mississippi Hardware Building unveiled plans Thursday for a $19 million project to convert the former garment factory and hardware building into a multi-floor innovation and tech transfer center to serve the Vicksburg area and the central Mississippi region.

Following the presentation, the Board of Mayor and Aldermen allocated $300,000 to the project and directed city attorney Nancy Thomas to prepare a contract establishing a partnership between the city and developer Tim Cantwell concerning the project.

The board also approved contributing $20,000 toward the preparation of an economic development strategic plan for Warren County and Vicksburg.

Influenced by the presence of the U.S. Army Corps of Engineers and the Army’s Engineering Research and Development Center in Vicksburg, the hardware building development is expected to create a space to attract small and middle-sized businesses that could potentially work in federal-type programs.

“Being downtown, it seemed like a perfectly wonderful opportunity, because we very much want to increase the lifeblood of what our city is doing downtown,” said Dr. Jeffery Holland, former ERDC director.

“It seemed like the perfect location, tied into the convention center and other assets downtown, to look into the possibility of building a center for innovation in our city.”

The building’s first floor, Holland said, would be a center for entrepreneurship and for training. He said Mississippi State University has a National Science Foundation-funded center for entrepreneurship in Starkville, and the university’s president has committed to move one of the programs to Vicksburg. The school will also relocate its graduate program from ERDC to the Mississippi Hardware Building.

“That is a big deal to the community for several reasons,” Holland said. “The biggest reason is teaching the concepts they’re teaching college students today in their area — we can bring those to this community (and) the kids from Hinds, the kids from Alcorn and perhaps more importantly, the kids from the college and career academies in the Vicksburg Warren School District can be taught the same things the kids are being taught on campus.

“Should this all come together, we’ll have the first high school environment where kids are being taught formal entrepreneurship, which any document will tell you is the key to small business in the future.”

MSU Graduate Center will be on the building’s second floor, Holland said. He said the University of Mississippi and Tulane University in New Orleans have also expressed an interest to ERDC to join the program.

Making the graduate center available to the public, Holland said, makes it possible for other employers like Entergy to send employees to do graduate work.

The building’s third floor, he said would house small business commercialization offices and Port Authority offices. “We would finally have a one-stop shop where people were able to approach the folks that know how to teach people how to work with the government.”

Displaying an artist’s rendering and floor plans of the renovated building, Cantwell discussed the plans to transform the building into a multipurpose facility, which will include a manufacturing brewery.

“It’s a production brewery for distribution, and under new Mississippi law, you can now sell retail out the brewery door, and there will be an outside beer garden,” he said. The building will also include a cafe.

He said funding for the project will be done using a combination of a loan, Delta Regional Authority grant funds, federal and state historic tax credits and federal and state new market tax credits, which will be converted to money by bringing in a partner that will receive a pass through of the tax credits. He projected an estimated $9.5 million in debt service covered by lease payments.

“I believe Vicksburg has the capability to become a world-class city, and I see no reason why that can’t be done,” Cantwell said. “You need a bunch of things, but boy, you need technology, you need education, you need to leverage this extraordinary situation you have here with a little $1 billion subset in the Army Corps of Engineers. You grow this thing; this is the tip of the iceberg.”

The Mississippi Hardware building has been vacant since closing in October 2013, and its future use has been a topic of speculation since, including the possibility the building would be converted into a hotel to serve the Vicksburg Convention Center, which sits on the west side of Mulberry Street across from the building.

Mississippi Hardware was known as an outlet for hard-to-find tools such as wrench sockets, drill bits and off-size nails, and the building was the store’s third location since its establishment in 1935.