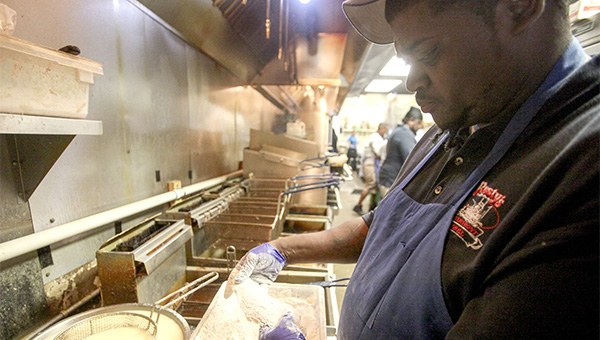 The lunch crowd has already started to congregate outside the doors before they are unlocked a few minutes after 11 a.m. Thursday. It is catfish day at Rusty’s Riverfront Grill and soon the restaurant will be filled to capacity.

Rusty’s only serves catfish on Tuesdays and Thursdays, but the restaurant still manages to through up to 90 pounds of the fish each week owner Rusty Larsen said.

“Those are two of the biggest lunch days we have,” Larsen said.

Catfish, especially the deep-fried variety, is a culinary staple throughout the south. It holds a particularly special place in Mississippi, though.

More catfish is produced in the Magnolia State than any other area of the country with 150 catfish operations raising farm raised catfish in the state in 2016 according to the Mississippi State University Division of agriculture, forestry and veterinary medicine.

“It is such a mainstay in Mississippi,” Rowdy Nosser, who owns Rowdy’s Family Restaurant, said. “The Catfish Institute has really done a wonderful job promoting the industry. That industry impacts a lot of jobs here in the state of Mississippi. That is why they say Mississippi and the Delta is the catfish capital of the world.”

Catfish is a mainstay on the menu at Rowdy’s, and Nosser estimated they go through “anywhere from 750 to 1,000 pounds a week.”

Every pound of catfish served at the restaurant, as has been the case since they opened, is produced in the state of Mississippi.

“Mine comes out of Indianola,” Nosser said. “I use Delta Pride, which is one of the first catfish companies that ever came to be. It helped put me in business and put me where I could sell catfish like I did.”

Larsen said that although they only serve the fish two days a week, they also make sure to only buy fish raised in Mississippi.

“It is always important to support your community and state as much as you possibly can,” Larsen said. “Buy as much here and spend as much here.”

“The catfish industry is fairly unique among agriculture industries with respect to its economic impact,” Roger Barlow, The Catfish Institute president and executive director of Catfish Farmers of America, said in a release. “Every element of our industry has an economic return that benefits the areas where the fish are grown, as well as the entire region.”

According to the MSU report, the catfish industry provided $169 million worth of economic impact to the state and occupied 35,000 acres of production in 2016. Overall, catfish is the seventh largest agriculture product in Mississippi.