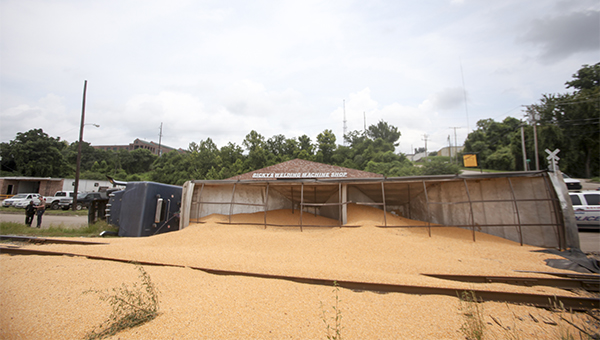 Corn lies spilled onto a railroad track running along side Levee Street due to a tractor-trailer overturning at the intersection of Depot and Levee street around 12:30 p.m. Friday. (Courtland Wells|The Vicksburg Post)

Levee Street and the railroad tracks that run alongside it were temporarily closed Friday afternoon after an 18-wheeler flipped, spilling its load of corn across the tracks and blocking the right-hand lane.

Vicksburg Police officer Judson Maglorie said officers responded to a call at 12:31 Friday that a truck had flipped on Levee Street.

“[The driver] was coming down the hill on Depot, and he didn’t have brakes,” Maglorie said. “He was hauling too top heavy and when he made the turn onto Levee Street, the trailer flipped over.”

Maglorie said when officers arrived on the scene the driver, who was later identified as Joseph Lively, was not there.

“The driver came back about 30-40 minutes after and made it seem like he wasn’t the driver,” Maglorie said. “He went to find another driver to claim that he was the driver and not him.”

Lively was arrested and charged with leaving the scene of an accident, improper equipment and providing false information to law enforcement.

The road was reopened around 4:35 p.m. Friday, but they were still working to cleanup the corn by vacuuming it up with a large pumping truck Maglorie said.

Because the corn spilled across the railroad tracks, the tracks had to be shut down until they were cleared.

“We have to keep everybody safe, notify our train crews and make sure there is nobody in the area,” Jeff Buck, general manager of Vicksburg Southern Railroad, said.

“We have to notify our dispatchers and keep everybody safe.”

At the time of the accident, Buck said all trains were north of the area and wouldn’t be impacted unless the track remained closed for an extended period of time.

“If they get this cleaned up within the next four to six hours, we won’t have any impact,” Buck said.

“If it goes past six, eight hours it will impact traffic. We will hold our trains outside the yard until they get it cleaned up. Then we will bring them into the yard and make sure the track is safe to go over.”

Maglorie said they were not sure who the truck belonged too, but that Lively said he owned it.

The load of corn was destined for Gavilon Fertilizer.

A representative with Gavilon said the load was worth about $5,000 and the corn was to be used to make ethanol.