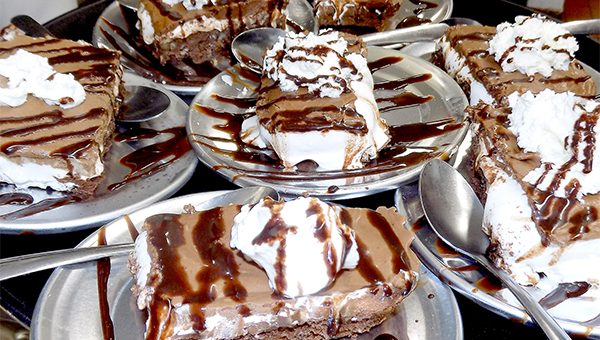 For almost 30 years, many Vicksburg residents have gotten their chocolate fix with a slice of Mississippi mud pie at Rowdy’s Family Restaurant.

The sweet treat has been one of the city’s many unique dining experiences that has flown under radar since Rowdy Nosser opened his restaurant in 1988.

That is about to change.

Aug. 18, Rowdy’s Mississippi mud pie, which is made from a secret family recipe handed down through generations, will be one of the featured attractions on the INSP’s “State Plate” food show hosted by recording artist Taylor Hicks. Oct. 24, it will be featured on the Travel Channel’s “Bizarre Foods, Delicious Destinations,” hosted by Andrew Zimmern. Solly’s Hot Tamales will also be featured on the Travel Channel broadcast.

“Both of them reached out to a family restaurant about a dessert,” said Angela Abraham Ladner, Nosser’s marketing and public relations consultant.

The interest in the pie was the result of an inquiry by a Travel Channel representative through Rowdy’s “flock site,” an internet platform developed by Ladner to reward customers for their business to the restaurant.

“I started talking about the products, and he said, ‘That’s not what I’m interested in. I want to talk about the Mississippi Mud pie.’”

The program, Ladner said, looks at the history behind the origin of mud pie. She said her research indicated Mississippi mud pie came to Vicksburg through Jenny Meyer, a woman from Greenville, where the pie was served in a restaurant.

Meyer, who was misplaced by the 1927 flood, came to Vicksburg, where she went to work as a server and began making the pie.

“They thought Vicksburg was the original location where mud pie was made,” she said. “That was when Rowdy sat with his relatives. We’re not so sure that lady wasn’t connected to Rowdy’s family, because this recipe has been passed down for so long.

“I know there are all different versions of mud pies out there, but we’re just talking about this mud pie that we’re serving at this restaurant.”

What got Nosser interested was the information he received from his 85-year-old aunt, Sybil Warner, who believes the family recipe was developed after the Civil War.

“It actually came to me from my grandmother. My grandmother was born in 1907, and Sybil said her grandmother had it when she was a little girl,” he said.

“We ate it growing up every year. When I began business, mama started helping me by making that pie and bringing it to the restaurant and it’s been served there ever since, business started in 1988.

“Everything in it is real ingredients. The recipe has not been altered to my knowledge; never been changed, It’s not been compromised,” Nosser said.

“And it’s held very close to the vest; a handful of people know the recipe. It’s never been published. It’s been a family secret,” Ladner said. “The ingredients are not complex”

Nosser credits Ladner for creating the interest in his restaurant and the mud pie.

“Angela gave me the platform where you wanted to be in your life,” he said. “Until then I had no plan where to be in my life. She is my lifelong friend; literally everything we’ve touched has turned to gold.”

“We refocused to take it to the next level,” Ladner said.

“She gave me the platform of where we wanted to be,” he said. “She came and developed a flock platform that provides rewards for customers. The Travel channel inquiry came through the flock site.

“That’s not the way we quite expected it. They put us in contact with a producer and wanted the pie.”

The television segments are not the only exposure for Nosser’s Mississippi mud pie.

Nosser has been asked to represent the state of Mississippi at the LargeFood festival in St. Louis at the end of October, where the mud pie will be the featured food from the state.

He has started a new business, Rowdy’s Mississippi Mud Pies, offering the online sale of mud pies for at-home delivery.

“We know the Travel Channel has such a far reach that once this is played and replayed, that will stimulate a lot of attention to not only the mud pie, but to the city of Vicksburg and to the state as a whole,” Nosser said, and promoting the city is the main goal of the TV appearances.

“That’s where I was headed when I had this opportunity, to take the focus off me and to give something back to my hometown,” Nosser said.

“Life right now doesn’t get better; it’s about the dream, but also about Vicksburg. How often do you get to put your whole town on the map?”

Mississippi mud pie, he said, is an example of what makes Vicksburg special.

“It’s the unique restaurants — the local restaurants are really what makes this town special when people come into Vicksburg. Not just Rowdy’s.

“And when I get to St. Louis, I’ll promote Vicksburg and the opportunity to have a unique dining experience. There is a lot going on in this town. It’s amazing it’s all coming together at the same time,” he said.

“ I’m the luckiest guy in the world. It’s a miracle, what’s happened to me. This has been a game changer Not only for me, but for my hometown, and I can’t believe how great it is and everything looks fantastic.

“I look back and see this thing evolve, and I can see mama walking through the door right now with 50 or 60 pies right now. She never showed me that recipe until a couple of years before she died.

“When I started there were 36 restaurants in Vicksburg. Now there are 107, and I think in the shuffle of that we didn’t have platform.”

That platform, he said, is to focus on Vicksburg and the state and the iconic foods and experience visitors experience.

“I don’t think Rowdy’s would be where it is today without my mother, without Angela without Linda Banchetti.

“I’m planning to stay a little longer in the restaurant business and I mean just a little bit longer, because the world needs more good people than it needs good restaurant owners. I can see the light at the end of the tunnel,” he said adding he would like to see his son, Regan eventually take over the restaurant.

He recalled something his aunt Lila Lee Nosser McRight told him: “A good name is rather to be had than gold, and love and favor than silver.”

“I think my mother would be gleaming right now.”