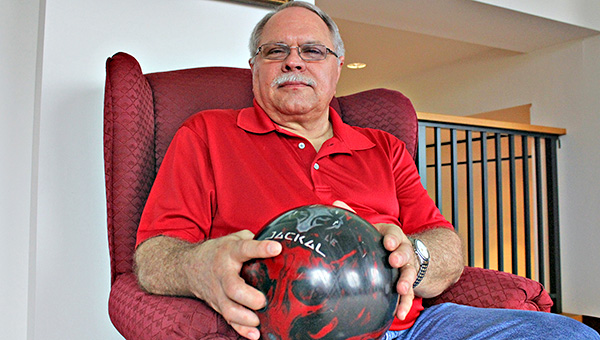 Vicksburg resident Jackie Strange bowled a perfect 300 game and a 296 on back-to-back days at a tournament in Natchez in July. (Ernest Bowker/The Vicksburg Post)

Before he went to Natchez last month for the Grandma and Grampa bowling tournament at the city’s Bluff City Bowl, Vicksburg resident Jackie Strange got a request from his granddaughter.

“They have a thing where if you throw three strikes in a row, you get to pull from a grab bag. It’s mostly trinkets for the kids,” Strange said. “She wanted me to bring her some.”

Strange returned home with nearly enough of the small toys to fill a U-Haul trailer.

The 64-year-old rolled a 296 on the first night of the tournament, just missing a coveted perfect 300 game with a bad throw on the last ball. The next day he stayed in the zone and didn’t mess up, and finished out the 300.

It was the seventh 300 game that Strange has had in nearly 40 years on the lanes, and the first in about four years.

Strange is no stranger to perfect games. Besides the seven he has bowled in competition, he estimates he’s taken more than 20 into the last frame and rolled more than 20 in practice sessions.

He even rolled 19 consecutive strikes, but not a perfect game, across two games once in a tournament in El Paso, Texas, and finished with a 289.

Perfect games require a bowler to roll all 12 balls for strikes. In the 10th frame, bowlers get up to two bonus rolls if they knock down all the pins. The next-to-last strike, Strange said, is the hardest to get.

On the night of Saturday, July 8, Strange had no problem knocking down the pins for his 11th strike. He was in a groove and closing in fast on perfect game No. 7. Then, on the last ball, the ball slipped from his hand during his release. He only knocked down six of the 10 pins, leaving him at a tantalizingly close 296.

“I knew it when it happened. I tried to make up for it with my fingers and couldn’t quite get enough of it,” Strange said. “I wasn’t nervous. I was maybe too relaxed. That’s when it ticks you off, when I made 11 of as good a shot as I could make and then made one bad shot.”

The next game was even worse for Strange. He carries an average of just over 200, and rolled a 181 in his third game of the three-game set that forms the basis of most competitive tournaments. Luckily, he had another opportunity the following day in a team event in the same tournament.

After rolling a 229 in his first game, Strange once again got into a groove. He plowed past the mental hurdles on the 10th and 11th balls, and ripped off a flawless roll on No. 12. Other bowlers, including some competitors who had seen his near-miss the night before, rushed over to congratulate him as the pins fell to finish the perfect game.

“I tell people that I’ve never shot a 300 without getting a break — until last month in Natchez,” he said with a grin. “I didn’t get a break because I didn’t need a break. I was carrying all of my shots.”

After collecting his accolades — as well as the prizes for his granddaughter — Strange turned his attention back to bowling. He finished his set with a 226 in the last game. Up next for him is the league season this fall at Indian Lanes in Clinton.

The 64-year-old said he enjoys the competition, whether “it’s tiddlywinks” or bowling. He’s reduced his schedule from bowling almost daily to once a week, but has no plans to retire from the sport he’s enjoyed since he was a teenager.

And, when he’s rolling like this, why should he?