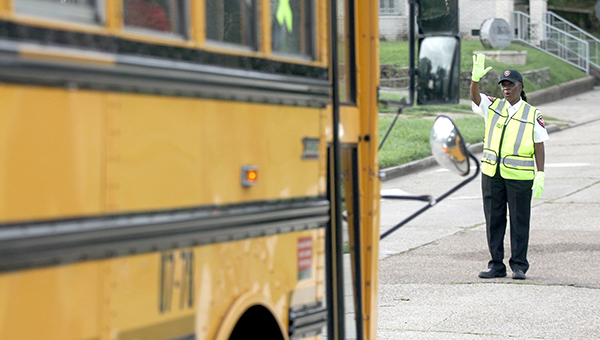 Sandra Atkins waves to a bus as she directs traffic at the intersection of Baldwin Ferry Road and Court Street Friday morning. Atkins has been a crossing guard for 21 years, 10 of which have been at Vicksburg Junior High School. (Courtland Wells | The Vicksburg Post)

A beige Kia Soul pulls onto a gravel drive off Rosa A. Temple Boulevard and a familiar face emerges as the driver’s side door opens.

For more than 10 of the 21 years she’s been a crossing guard, Sandra Atkins has been directing school traffic and children going to and from Vicksburg Junior High School. As she stands at her spot adjacent to the Kansas City Southern Railroad crossing, she waves at the cars and buses passing by.

Atkins got her start as a crossing guard through Vicksburg police officer Randy Naylor, whose wife worked with her at the Vicksburg High School cafeteria, where Atkins stills works. “I’ve been there 24 or 25 years,” she said.

“He helped me get the job as a crossing guard.”

During her tenure, she has served under three supervisors, Jackie Johnson, Lt. Leonce Young and deputy chief Eric Paymon. Her first job was off U.S. 61 South as a crossing guard for Dana Road Elementary School “when we had to use a large stop sign and wear orange vests.”

The stop signs have since been replaced by bright, fluorescent yellow gloves and the orange vest is now bright yellow with reflective strips.

She later transferred to her present post, and with the exception of several months when she filled a crossing guard vacancy at Vicksburg Catholic Schools, Atkins has remained on Rosa A. Temple.

“When I first started (at her present post) there were a lot of kids walking here. I had a lot of activity in this spot, but it’s better. Now they’re riding buses and cars. They’ve really have grown up a lot since that time.

She said working as a crossing guard has been very interesting, “It’s had it sgood days and bad days; most of the kids, as the years went on, have gotten better.”

“I really enjoy the job; meeting people. Drivers wave to me every morning; they’ll talk to me. You must show yourself to be friendly in order for people to respect you. They (the drivers) give you kind words, and during the holidays, I have parents or kids stop by and they might give you a little gift for the holidays. Drivers sometimes will give me water or something to drink.”

And there are times when Atkins provides an act of kindness.

“Sometimes kids don’t have anyone to talk to, and you can always pick a kid like I do some times when I work at the cafeteria,” she said.

“You see a kid sometimes walking all by themselves, you might find a way where you might talk to that kid and give them a kind word sometimes. That’s what we’re here for more than helping them get safely across the street. Share a kind word with them.”

She said the activities on her corner rarely change, adding she sometimes sees funerals pass by from a nearby funeral home, and she’s seen police cars pass by as they respond to calls.

The hardest part of the job is rainy weather, “Because we have to be out unless it’s really pouring down rain and thunder and lightning, or something like that. That’s really the hardest part about it, standing out in the rain, because people have a tendency to drive fast in the rain. I don’t understand that.”

She can deal with the cold weather, she said, and heat is not a problem.

And while the railroad tracks run right by her station, Atkins said the trains don’t pose a problem.

“Every once in a while you might have a train that might stop and they (buses and carpools) have to go around and it’s not so often that happens, because they work pretty well with school times.”

Railroad officials, she said, are good about stopping by and asking her if there are any problems that need to be corrected to make the crossing better.

One of the biggest changes Atkins has seen is the reduction of students walking to class.

“When I first started on this corner, you had a lot of walkers then. You had quite a few kids that lived in the area and walked. Now, they go by carpool and buses. In the evening is the majority of my walkers. Last school term, I had at least 15 to 20 walkers in the evening, and in the morning, 5 to 6.

“I might have eight or nine buses come through here coming from the Academy (of Innovation), because students are being bused from Vicksburg Junior High School to the Academy of Innovation in the morning and in the evening. Seventh- and eighth-graders arrive at the school and then we bused to the academy on Grove Street.”

Atkins said she has about four to five years before she’s eligible for retirement, but added she may stay on a little longer.

“The grandbabies want me to stay. I’ve got one grandbaby at Bowmar School and she’s in the sixth grade. She wants me to basically stay until she’s in the ninth grade. She’ll be coming by next school term; she’ll be at the junior high school, but she’ll be going to the academy.

“I’ve probably got to see that through.”