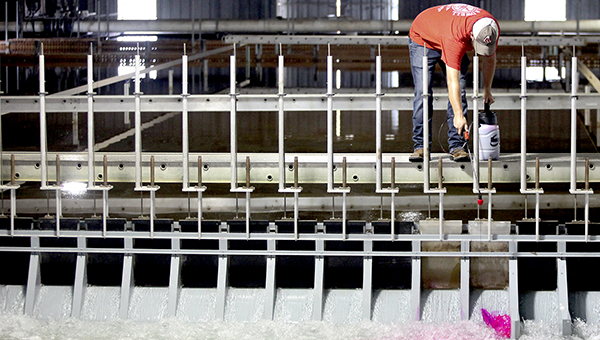 The McNary Lock and Dam rises 183 feet above the Columbia River in Umatilla, Ore., but a much smaller exact replica can be found much closer to home.

The Coastal and Hydraulics Laboratory at the U.S. Army’s Engineering and Research Development Center in Vicksburg is home to a 1/55-scale model of the McNary Lock and Dam.

Everything from the topography of the riverbed to the dam itself is an exact replica of the full size structure located in Oregon. The scale model is used by researchers to answer a variety of problems and to test proposed changes to the actual structure.

“This is one of eight buildings the coastal hydraulics building has,” Jackie Pettway, the chief of the Navigation Division, said. “We have about 1.3 million square feet of hangar space where we do physical modeling and laboratory testing. When we do these, sometimes they are site specific.”

The McNary Model, which is one of the site specific models, is one of many housed at ERDC, where researchers and interested parties can come together and problem solve or test ideas on a workable scale.

“There is a lot that can be accomplished at the table with multiple agencies,” Pettway said. “They can move the gates. They can drop the paper. They can look at dye and all come to an agreement, even if they have competing interests.”

When turned on, the scale model functions the same as the structure in Oregon with the water flowing at the same speed and in the same amounts so researchers can study its impact and the flow patterns of it. As the water flows, dye is added, paper confetti is thrown in and even remote control boats are introduced to the model.

“What we do is, we look at impacts to navigation,” Pettway said. “We look at improving flood protection. Some of the focus here is fish passage and how the fish are impact by the dam and how we can operate to improve survivability for the adults and juveniles who move through the system.”

The accuracy of the models enables boat captains to come in and control the remote control boats and experience a simulation of the exact conditions they will meet at the actual locations. This enables them provide input and for changes to be made if needed.

Pettway said one test in the past enabled them to save $10 billion in construction costs because they were able to cut the project in a third by showing the excess was not needed. For another project, they were able to bring in surfers worried that a new construction project would hinder their waves and show that there would be no impact.

“The ability to have all the agencies come down and see this and make all the changes they want to see, and come to agreement before everyone leaves, that is priceless,” Pettway said.

Overall, the projects at ERDC attract about 160 groups and 4,000 total visitors to Vicksburg annually. Some of those are researchers and agencies using the resources, but the labs are also used as an education resource for students at all levels.

The Coastal and Hydraulics Laboratory has made great strives since 1929 when the original model was built using dirt to create a dam.

“The first model was a physical model built in dirt down the hill,” Pettway said. “We dammed up Brown’s Lake and used it as a water supply. That was the only way you could understand the water. Now, we can do a lot on the computer, but you still have to have the physical model.”

The computers have not replaced the need for the actual models though and they continue to be a core part of the research at ERDC.