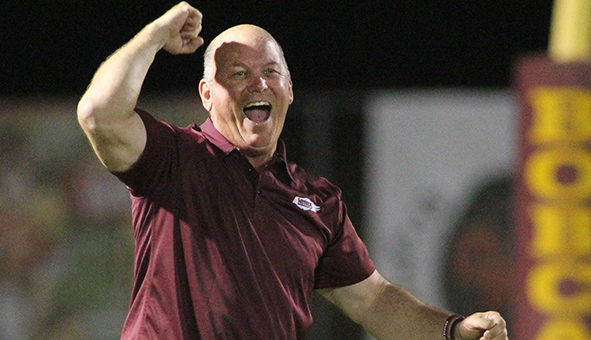 Hinds Community College football coach Gene Murphy celebrates after a play during a 2013 game. Murphy, who has been Hinds’ head coach for 23 years over two separate tenures, announced Wednesday that he is leaving the job effective immediately. (File/The Vicksburg Post)

RAYMOND — Gene Murphy, who has been the head football coach at Hinds Community College for 23 seasons, stepped down from the position on Wednesday.

Murphy, who has also been Hinds’ athletic director since 1997, will continue with the school in that role.

Assistant coach Larry Williams was named as Murphy’s successor. Williams has been Hinds’ defensive coordinator for the past four seasons, and also from 2003-09.

Williams plans to serve as both the head coach and defensive coordinator this season. Hinds plays a scrimmage at East Central Community College on Friday, and its season opener is Aug. 31 at Northwest Mississippi.

“I’ve worked with Gene for a long time now and I’ve learned so much from that man. He changed the culture and set the high standards not only for Hinds Community College but Mississippi junior college football in general,” Williams said in a statement. “My main goal is to continue to build upon the great tradition of this football program and to make Hinds a household name in the state of Mississippi.”

Murphy had two long stints as Hinds’ coach, from 1987-2003, and again from 2009-16. He has compiled a 172-76-5 record across his two tenures. He led Hinds to the Mississippi Association of Junior and Community Colleges state championship six times, including four in a row from 1994-97. His last state title was in 2000.

Murphy had been the winningest active coach in the National Junior College Athletic Association.

Murphy’s Hinds teams made the state playoffs 14 times and played in eight junior college bowl games.
More than 50 of his players have played in the NFL, and dozens more have continued their college careers at four-year schools.

“It is my hope that my coaching legacy will be, in short, an impact on thousands of young men in learning how to become successful on the football field, but more importantly in the game of life,” Murphy said in a statement.