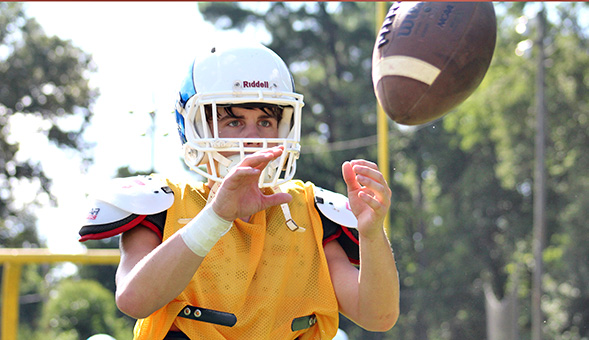 As their first game week of the season began Monday afternoon, the Porter’s Chapel Academy Eagles got on the field a little earlier than usual.

Normally, the first hour of the work week would be spent studying film and introducing the game plan. For the opener against Columbus Christian, that wasn’t an option.

“I know they do have a team and we’re playing them on Friday. That’s it,” PCA coach Blake Purvis said with a chuckle. “They haven’t scrimmaged, they haven’t played a jamboree, so I don’t have any film on them other than some from last year.”

Luckily, the lack of game film isn’t a hindrance this time of year. The Eagles have flown blind into preseason scrimmages against four opponents the past two weeks and come out fine. The defense did not give up a point, while the offense showed enough life to be encouraging following a difficult 2016 season.

The team’s preseason performance allowed Purvis to roll with the change to the usual routine.

“We’ve prepared well the last two weeks on defense without having film or a game plan, so I’m not worried about that,” Purvis said. “Our practice plan and game plan is going to be similar. We’re going to go in with our base stuff and try to make adjustments based on what we see.”

The defensive effort has been especially pleasing for Purvis. It was a strength for the team last season, but good first-half efforts often went for naught when players tired in the second half. Many of them had to play both ways, and an ineffective offense left them on the field for too long on defense.

This year, however, there are 35 players on the roster and the team has come through the preseason injury-free. The added depth has not only kept the Eagles fresher, it’s allowed them to keep players on one side of the ball or the other and sparked some pride in whichever unit they end up on.

“The depth is huge. Rolling nine fresh guys in on offense and defense, and then the guys we have to rotate in get some rest as well. It’s hard to tell how good of shape we’re in, but it’s definitely something we’re taking advantage of,” Purvis said. “They definitely take pride in whichever unit they’re on, offense or defense. You’re seeing some chatter in practice. It helps bring some energy to both sides of the ball.”

Both PCA and Columbus Christian would certainly love to see a win on Friday. Columbus Christian finished with a 2-8 record last season and has only had one winning season since joining the Mississippi Association of Independent Schools in 2007.

PCA won one game last season and hasn’t had a winning record since 2008. The Eagles had won five consecutive season openers from 2010-14 before losing their last two to St. Andrew’s, and Purvis said a victory this week can continue the good vibes for what is shaping up to be a promising season.

“It validates what we think coming out of the summer and the spring,” Purvis said. “We think we have a good product, but it’s hard to gauge when you’re mostly playing against each other. Having a good performance in the opener validates that and gives you momentum going forward.”