Gators get last shot at Oxford in Red Carpet Bowl 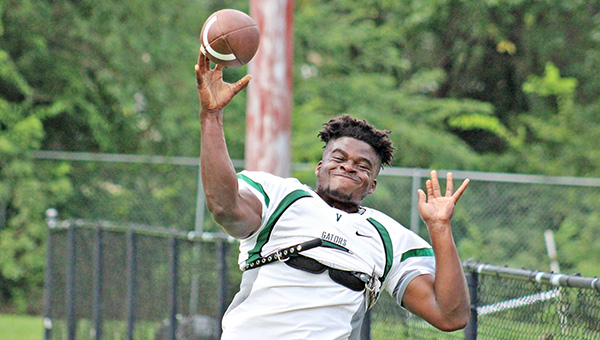 Vicksburg High quarterback Joe Johnson throws a pass in warmups before a jamboree game last week in Jackson. The Gators will play Oxford in the Red Carpet Bowl, Friday at 5:30 p.m. at Warren Central. Tickets are $15 at the gate. (Ernest Bowker/The Vicksburg Post)

Almost two years have passed since Vicksburg High and Oxford last met on the football field. Both rosters have had their share of turnover, and the fortunes of each program have waxed and waned.

It hasn’t been so long, however, that the Vicksburg Gators aren’t itching for what might be their last chance at some payback.

Vicksburg enters the 2017 season with 34 seniors on the roster, including several who were starters when Oxford beat them 35-21 in the first round of the 2015 Class 5A playoffs. It’s a shared past the Gators are drawing on heading into Friday’s Red Carpet Bowl rematch at Warren Central’s Viking Stadium.

Oxford and Vicksburg kick off the annual doubleheader at 5:30 p.m. Warren Central and Clarksdale play in the nightcap at approximately 8 p.m.

“Any time you have a history with a team and get a chance to play again, it brings back memories — especially when they beat you in the playoffs,” said Lorenzo Breland, who will make his regular-season debut as Vicksburg’s head coach. “Definitely, we’re going to be able to use that as motivation.”

Oxford also ousted the Gators from the playoffs in 2013, although that was before this year’s senior group made its way up to the varsity roster. This, however, is likely to be Vicksburg’s last shot in the forseeable future at scoring a win over the team that reached three consecutive state championship games from 2013-15.

The Red Carpet Bowl will mark Oxford’s first game as a Class 6A program, after it was moved up in the latest Mississippi High School Activities Association realignment. That means the Chargers and Gators will not meet in the playoffs this year, nor in 2018 when teams normally play the second half of a home-and-home series.

The Red Carpet Bowl signs two-year contracts with schools to play against the Warren County teams, so Oxford will face Warren Central in 2018 while Vicksburg opens the season against Clarksdale.

This is Oxford’s first appearance in the Red Carpet Bowl’s 55-year history, while Vicksburg is, of course, a regular. Breland, who spent the past two seasons on the VHS staff as an assistant, said it requires a slightly different approach because of the atmosphere and early start time.

“Any time we play in the Red Carpet Bowl, you know it’s going to be a big crowd,” Breland said. “Playing the early game changes your psyche a little bit. It’s a simple adjustment in the schedule. Everything gets moved up one hour. You leave earlier, eat earlier, warm up earlier. We want them focused on playing the game, whether it’s at 6, 7 or 8.”

The game itself figures to be a matchup of strength-on-strength.

Oxford features a high-powered offense that gained nearly 4,500 yards and averaged 25 points per game last season, and has quarterback John Reece McClure (2,380 passing yards, 21 touchdowns, 10 interceptions in 2016) back for another season at the controls.

Vicksburg also has a returning starter at quarterback in Joe Johnson (3,010 yards, 31 touchdowns, 12 interceptions in 2016), but proudly relies on its defense. The Gators allowed 19 points per game last season and have eight starters back on defense — including three-year starters Michael Sullivan and Jo’Mon O’Neal on the line, and Nick Anderson at linebacker.

O’Neal and Anderson have won the last two Vicksburg Post Defensive Player of the Year awards for Warren County.

The Gators forced two turnovers and held Provine scoreless in a two-quarter jamboree last week. After giving up 51 rushing yards on five plays on Provine’s opening drive, Vicksburg recovered a fumble and did not allow a first down on two other possessions.

“We’re going to hang our hat on defense with a lot of seniors, a lot of game experience, and flying to the football,” Breland said. “We’re just making sure we’re sound with our fundamentals and disciplined. If we get some stops on defense early, I think we’ll be in good shape.”