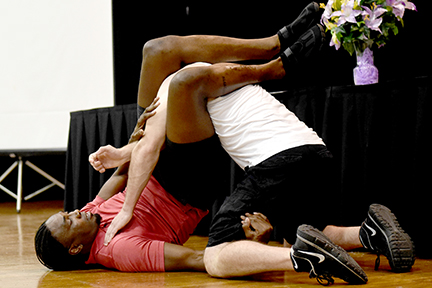 More than 100 people received an education in domestic violence and sex trafficking at a one-day conference Friday at the Vicksburg Auditorium.

“For our first time doing it, it came off extremely well,” said Vicksburg Municipal Judge Toni Terrett. “The people really became engaged with the presentations.”

The most compelling program, she said, was on sex trafficking by the Sex Trafficking Institute.

The program was presented by Leach Rogers, a sex trafficking survivor, advocate, speaker and author, and Christi Decoufle, an officer with the Phoenix, Ariz., Police Department and a detective in the department’s Vice Enforcement Unit, and member of the FBI’s Human Trafficking Task Force.

Rogers said the purpose of the program is to show both sides — from law enforcement and from the victim. “There are always two sides,” she said.

She recalled her experience of being forced into prostitution and the mental and physical abuse she received at the hands of her pimp and later by his brothers.

“The physical abuse; the bruises and cuts and the pain I could get over,” she said. “The toughest part was the psychological and mental abuse. That was the worst.”

Rogers said best thing that happened to her was being arrested, although at the time it seemed her worst experience.

Decloufle, who questioned Rogers after her arrest, told the group, “I treated her like a suspect, not like a victim. I think that was a lesson learned.”

Now, she said, she thinks differently and lets people know she wants to help them.

“I was scared,” Rogers said said. “It wasn’t that I didn’t want help, I didn’t know how to ask for it. I didn’t know there was help available for me. I felt all alone.”

During the presentation, Rogers played a video of her initial interrogation by Decloufle, and asked people in the audience for their opinion on how she looked and acted.

She said women pushed into sex trafficking are coached what to say if they are arrested by police and put the blame on themselves.

“They’re trained how to act and talk,” she said, adding she was later charged with 21 counts of prostitution, something she could not understand because she had been forced into doing it. She later accepted a plea agreement and served 18 months of a 7-year sentence.

Being in jail, she said, was the best thing that happened to her.

“In jail, I found myself,” Rogers said. “I took the time to sit down and face my self. I needed that time. I turned to God.”

Decloufle said the responses from the audience outlined the problems law enforcement face with trafficking, adding she now looks at both sides and tells women arrested for prostitution there are programs available to help them.

“What I would like to see is some programs to help people,” Rogers said. “We should be able to send these women into programs as opposed to jail.”

Terrett said the sex trafficking program helped provide information on the problem and taught the conference participants the terminology.

“I think it got their attention, because this is something we don’t talk about a lot, because it’s not as prevalent; it’s not in the forefront.”

She said the plan is to hold another conference next year with the goal of making it an annual event and expanding it.

“I think it was a very good conference,” said Haven House director Georgia Grodowitz. “I think it went really well and I want to see us build on it and have it grow.

“I think we need more things like this to bring the people in the community together so they can learn about the problem of domestic violence.”