Mistakes send Vicksburg down in defeat vs. Oxford 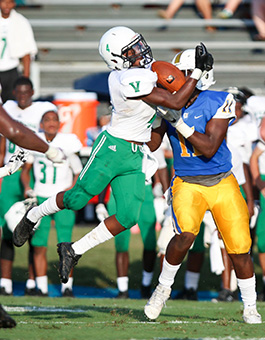 Vicksburg High defensive back Jamaal Jefferson steps in front of Oxford receiver Dede Peques for an interception Friday in the Red Carpet Bowl. Jefferson returned the pick 30 yards for a touchdown, but Oxford went on to beat the Gators 21-6. (Walter Frazier/For The Vicksburg Post)

A passing thunderstorm late Friday afternoon muckified the field at Viking Stadium, and seemed to have the same effect on both teams in the opening game of the Red Carpet Bowl.

Vicksburg and Oxford combined for 27 penalties. Each team scored a touchdown off a critical mistake by the other. Neither did much to thrill the fans on their side of the bleachers.

At some point, Oxford got a board under its feet and found some traction. The Gators never did.

Hiram Wadington rushed for 145 yards and a touchdown — including 111 yards in the second half — and also caught a touchdown pass, and J.R. McClure threw for two scores as Oxford beat Vicksburg 21-6 in the 55th annual Red Carpet Bowl.

Vicksburg finished with just 116 yards of total offense. It was penalized 16 times for 107 yards.

“It’s frustrating. You can’t make excuses, but we haven’t been able to practice because it’s gotten rained out. Our jamboree got rained out. This game almost got rained out,” Vicksburg coach Lorenzo Breland said. “When you play a good program like Oxford, you can’t make all those mistakes and expect to win. That’s just the bottom line. We had way too many delay of game, way too many false starts, just way too many dumb penalties where we were shooting ourself in the foot. You just can’t win like that.”

The Gators had a two-game winning streak in the Red Carpet Bowl snapped despite a strong effort from the defense.

Oxford only had 92 yards in the first half, and the Gators got a defensive touchdown on a 30-yard interception return by Jamaal Jefferson midway through the second quarter. Jefferson stepped in front of a McClure pass on a sideline route and raced toward the end zone, fighting off a tackle by McClure at the goal line to get in.

“I just saw him coming with the outlet, and I jumped when he threw it,” Jefferson said.

The ensuing PAT attempt, however, was symbolic of the Gators’ night on offense and special teams. Three penalties moved the try from the 3-yard line to the 18, leading Breland to decide on a two-point try instead of a kick. The attempt was no good, leaving the score at 7-6.

“It ended up being too long of a field goal, so we just went ahead and tried for two,” Breland said.

The mistakes on the PAT were just three of many for the Gators. A dropped punt snap deep in their own territory led to a 20-yard touchdown pass from McClure to Wadington for Oxford’s first touchdown.

In the second half, the Gators had two long drives end in Oxford territory. Joe Johnson threw an interception in the end zone to finish the first one, while four penalties threw a wrench in the second. After catching a break when Oxford fumbled the return of a VHS fumble, giving the Gators the ball back at the 28-yard line, the penalties pushed them back to a fourth-and-38 situation and resulted in a punt with 9 minutes left.

While the Gators spun their wheels, the Chargers finally got going.

Wadington carried five times on an eight-play, 75-yard drive to start the second half, and McClure finished it with a 16-yard touchdown pass to Jaquan Webb for a 14-6 lead.

In the fourth quarter, the Chargers leaned on Wadington again. He broke off runs of 12, 22 and 8 yards on the first three plays to set the tone for an 11-play, 80-yard scoring drive. Wadington wound up carrying the ball six times for 61 yards on the 5-minute drive, including a bruising 10-yard touchdown run that made it 21-6 with 2:06 left in the game.

Wadington smashed the last Gator defender to the ground as he crossed the goal line, bringing an emphatic end to a difficult victory for the Chargers.

“The defense did a hell of a job coming out and holding a team like that to only seven points in the first half,” Breland said. “But offensively, we just have to get all the pieces of the puzzle in the right place.”