Vikings run away from Clarksdale 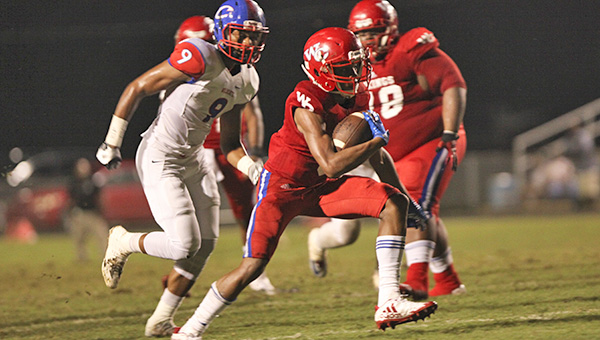 Warren Central capitalized on multiple second-half miscues by Clarksdale to win the second half of the Red Carpet Bowl doubleheader 28-3 Friday at Viking Stadium.

The Vikings and Wildcats were tied 0-0 after combining for less than 200 yards of offense in the first half.
Warren Central found a spark right from the get-go in the third quarter when senior Mason Quimby scooped a short kickoff at his 31-yard line and raced down the middle for 65 yards to the 4-yard line.

Four plays later, the Vikings punched it in for the first score of the game when quarterback F.J. Barnum rolled to his right and found Corey Wilson all alone in the end zone for a 1-yard touchdown pass.

“Our coach gave a great speech at halftime and then Mason catching that kickoff and taking it down to the five or whatever it was, gave us a big spark,” WC safety Walt Hopson said. “It started everything for us.”

The Viking defense, which only returned two starters from last year’s squad, dominated the Wildcats throughout the game. They held them to 135 yards of offense and scored two second-half touchdowns on scoop-and-score fumble recoveries.

With 2:39 remaining in the third quarter, defensive back Lamar Gray recovered a fumble at the 19-yard line and raced for the score to make it 14-0.

Defensive back Caleb Wilson scored the defense’s second touchdown with 9:40 left in the game when Clarksdale fumbled at its 14-yard line on the first play of a drive.

“When they saw a fumble, they were very opportunistic,” Warren Central coach Josh Morgan said. “To be able to score twice on defense really helped out.”

Mistakes send Vicksburg down in defeat vs. Oxford