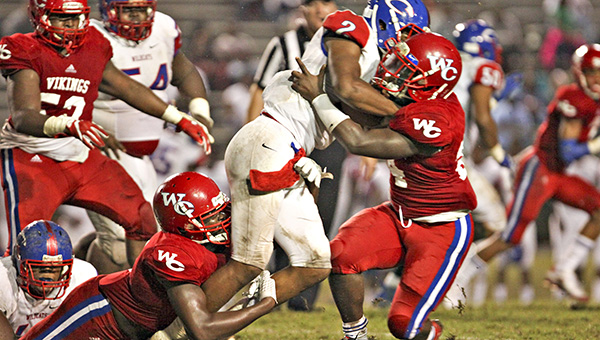 Heading into the second half of Friday’s season opener, the Warren Central Vikings were searching for a spark.
The offense had moved the ball on the Clarksdale defense in the first half, but the game was scoreless at halftime.

“We talked about coming out, starting fast, playing with a sense of urgency because we only had two quarters left and somebody making a play to spark us and get some momentum going,” WC coach Josh Morgan said of his halftime message.

The spark they were searching for materialized almost immediately in the second half when Mason Quimby scooped a short kickoff at the 31-yard line and raced 65 yards to set his team up for its first score of the night.
Four plays later the Vikings took the lead for good when F.J. Barnum found Corey Wilson for a short touchdown pass and the breakthrough score. The Vikings took that momentum and kept on rolling to a 28-3 victory over Clarskdale in the Red Carpet Bowl.

“We just needed some kind of play to give us a little momentum,” Morgan said. “Clarksdale is a very good football team. On the goal line, they kept us out for three plays. We scored on a fourth down play and if we don’t do that, who knows how the game ends? That was a big opening of the second half.”

Warren Central’s offense struggled to sustain drives throughout the night, putting pressure on a young defense with only two starters returning from last year. They stepped up, though, and gave the Vikings the cushion they needed with two scoop-and-score touchdowns on fumble recoveries.

“I thought our defense played outstanding all night long,” Morgan said. “We had some guys that when they saw a fumble, they were very opportunistic. To be able to score twice on defense really helped out.”

Lamar Gray scored the first defensive touchdown with 2:29 left in the third quarter on a 19-yard fumble return. Caleb Wilson matched his teammate with 9:40 left in the game when he scooped a fumble at the Clarksdale 14-yard line and raced for the end zone.

“We needed space,” Morgan said. “We needed cushion. It was only a seven-point game before that happened. We needed to separate ourselves from them. It is a charge. It excites the crowd. It excited the team. It is something to get you going. Momentum is very, very important in this game and there is nothing that really gets your team going like a defensive touchdown. Those were big.”

The defense stepped up throughout the game by holding the Wildcats to only 135 yards of offense.

“Especially such an inexperienced group, if they’ll do their job the best they can and really pursue the football, if everybody is on the same page and really trusts one another, it sure makes it easy to coach defense,” Morgan said. “I thought they did. I thought we tackled well for the first game. I don’t think we gave up a big play and that was really big especially going into this with the electric quarterback they’ve got.”

Morgan said he was impressed by the play of his junior cornerback David King and the way the defensive line played throughout the night.

“He (King) was one of those guys that we needed to play good,” Morgan said. “I think our ends and defensive line played really good pretty much all night controlling the run game, which is what they tried to come out and do. I am really just pleased with it.”

While the defense and special teams shined brightest, the Vikings’ offense did have its moments and its standouts.

Senior quarterback Barnum made his first varsity start and his budding chemistry with his go-to receiver was already on full display.

Barnum found senior tight end Colin Standish four times for 58 yards, including the longest pass of the night — a 32-yard catch-and-run across the middle of the field in the second quarter.

“Those two have grown up playing together,” Morgan said. “Colin is one of our few returning starters from last year. We expect him to do those kinds of things. They definitely have a very good connection and have had it all offseason and fall camp.”

Five other receivers combined for six catches for 42 yards as Barnum went 10-of-21 passing for 90 yards and a touchdown.