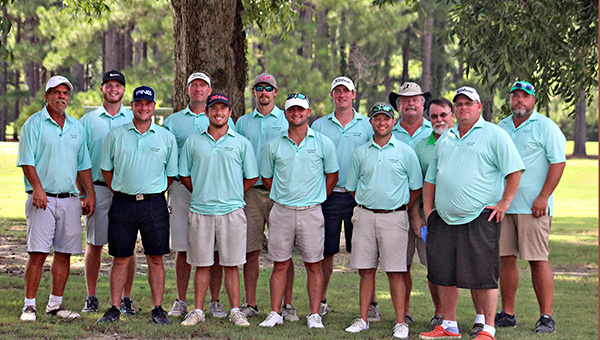 After two grueling days of competition, the Warren County Cup remained at Vicksburg Country Club — at least until someone from Clear Creek Golf Course can drive over to retrieve it.

Clear Creek won six of the 14 singles matches on Sunday, giving them a 15-13 victory over the Country Club’s team and possession of the Cup for the eighth time in nine years.

The actual Warren County Cup trophy, however, was left at the Country Club before Sunday’s matches. The VCC team won it last year in a 21-7 rout and has had possession of it for the past year. No one remembered to bring it to Clear Creek for this year’s competition.

VCC team member John Halpin Caldwell said it was a simple oversight, but the Clear Creek members playfully turned it into another example of what they considered an upset victory.

“It feels good to be the underdogs and then come out on top, because I think we were 21-point underdogs. Maybe more,” Clear Creek’s Chris Whittington said. “They had a lot better players than we had. We have a lot of older guys that have been around here a long time but don’t get to play as much. That’s a good group of golfers (at VCC), and we just beat them.”

Whittington joked that the absence of the trophy was proof of his team’s underdog status.

“That’s how big of an underdog we were, that they didn’t even bring the Cup,” Whittington said. “I wouldn’t have brought it either, if I had that team. That’s USC vs. Delta State right there.”

Adding to the underdog vibe for Clear Creek was who came through in the clutch on Sunday. Most of those considered the team’s top players, such as Warren County Championship runner-up Parker Rutherford and perennial contender Kevin Neihaus, lost their matches in the later pairings.

Instead, it was the more overlooked players such as Tom Jones, Keith Ehrhardt, Justin Stokes and Tim Rogers that picked up the slack.

Jones routed Wilson Palmertree 7-and-6, Ehrhardt and Stokes both closed out their matches on the 17th hole, and Rogers got up-and-down for birdie on the 18th to beat Charles Waring 1-up.

Rogers was an alternate for Clear Creek’s team. He subbed in for Warren County Championship winner Channing Curtis, who played Saturday but was unable to return on Sunday for personal reasons.

“Fortunately, I didn’t have to play his opponent,” Rogers said. The Warren County champion is usually paired up with the VCC club champ, but Rogers was placed in the middle of the pairings. “It was a good, competitive match. I’m just glad I’m still standing up. It’s hot out here.”

In all, Clear Creek won five of the first seven matches on Sunday and halved another to increase its lead to 14-7 halfway through the session. VCC stormed back to win five of the last seven — only one of which went to the final hole — but Whittington beat VCC club champion Jake Dornbusch 5-and-4 to secure the final point needed to bring the Cup back to the county’s public course.

The VCC team finished with 7 ½ points to Clear Creek’s 5 ½ in the singles matches, but Clear Creek had taken an 8 ½ – 5 ½ lead after Saturday’s best ball and alternate shot rounds.

“They had some real good players on their team. The one through seven players were real evenly matched. We thought we maybe had a slight advantage on the bottom end, but this is their home course and they played better on it than we did,” said Caldwell, who earned one of the VCC’s points by beating Austin Neihaus 6-and-5.

Whittington’s Cup-clinching victory was a bit of personal vindication.

Whittington is a member of the Country Club but wasn’t able to compete in this year’s club championship because of a conflict with his work schedule, and thus did not automatically qualify for its Cup team. He was then passed over when the final captain’s picks were made. So, instead, the four-time Warren County Championship winner accepted an invitation to play for Clear Creek as a captain’s pick.

Whittington downplayed what he called his “transfer” to the Clear Creek squad, but his teammate Stokes eagerly chirped up on Whittington’s behalf.

“I was really surprised Chris wasn’t one of the captain’s picks for the Country Club. So he came here and qualified for us and beat their club champion to give us the winning point,” Stokes said. “If they’d have had Chris, he wouldn’t have been playing Jake (Dornbusch). I’m glad he did. That worked out good.”