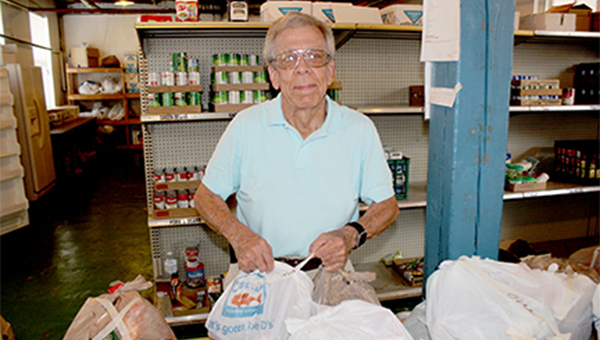 When the Global Leadership Summit met Aug. 10 in Jackson, a Vicksburg resident was honored as a local leader for his volunteer work in the community.

Hugh Green, who volunteers at the Storehouse Community Food Pantry, was honored for his service to the agency and the community, and for his present and past work with other community service agencies.

He was nominated for the award by food pantry president Charles C. Calhoun Jr., who cited Green’s work at the pantry, his duties as liaison with one food donor, his work with the local postal union and its annual National Letter Carriers Food Drive, and his other volunteer efforts.

“The award surprised me,” Green said as he sat in a rear area of the food pantry. “I went to the meeting; I wasn’t sure why they invited me to come, our (pantry) president sent me there, and when they started reading out the award, I got very emotional. I walked up with tears running down my face and people standing up and applauding. It was difficult to accept it.

“It’s tough to be recognized like that when there’s so many others down here also, doing the same work, and there are a lot of others working in the community, and I’m just humbled by it.”

Green began volunteering at the food pantry after the death of his wife in 2010.

“It was pretty quiet around the house, and I knew she wouldn’t want me to sit around the house and grieve all the time,” he said. “One of my friends, Harry McMillin, he was president at that time at the pantry, asked me to volunteer at the food pantry, and that’s when I got started. I’ve been involved since then. I started in January 2011.”

His first day on the job was accompanying McMillin to a local company to pick up frozen chicken donated to the pantry.

“Then, my having a truck, I started going to the grocery store. Each week now, I would say, we pick up between 36 cases and 60 cases of food a week on Wednesday. We also pick up groceries on Mondays, so a lot of food is purchased and goes through this place every week.”

Green said working at the pantry is rewarding, although he doesn’t like working the front desk, “Because that’s the tough place to hear the stories.”

His time is spent stocking the shelves and the refrigerators with food, and getting the bread.

“But the best part is being able to carry that food cart out to a car or truck, and I always tell them, ‘Good luck and God bless,’ because if they weren’t down on their luck, they wouldn’t be here. It’s amazing, the kind of responses you get. You get your neck hugged sometimes, sometimes you get tears, and sometimes they want to have prayer.

“It’s being in a situation where you can help people who are down on their luck.”

He recalled a man who came to the pantry who responded, “Lady, I’m hongry; I just need something to eat,” when he was asked about his emergency.

“We hear that back here (by the shelves) sometimes. We started packing the food up. I have seen one man, as soon as he got outside, he sat on the curb, and he opened up a can of Vienna sausage and a stack of crackers and he started eating. That’s the kind of situation you see sometimes, and you just be very thankful for the situation most of us are in.”

When people thank him, he said, he tells them the pantry is provided by the people of Vicksburg.

“We’re not a United Way organization. We survive by donations of cash and donations of food, and it always comes out that we have enough to give out.”

Green, who retired after 34 years as an engineer from the U.S. Army Corps of Engineers Waterways Experiment Station (now the U.S. Army Engineer Research and Development Center), has been involved in other community programs in the city.

He was a Boy Scout leader and assistant scoutmaster for 10 years, and saw three of his sons become Eagle Scouts. He also worked 10 years with Habitat for Humanity. He also delivers meals on wheels and visits nursing homes on Fridays.

“I recently attended a birthday party for a 94-year-old woman,” he said.

Green said he doesn’t do community service for awards.

“I’m doing it because my wife would scold me if I sat around grieving for her. I get out of the house. I live alone as a widower, maintain the house inside, and I maintain the yard outside, and at 82, I still hang in there.”

And he’s going to continue his volunteer work.

“Now I’ve got to spend five more years to earn that award they gave me. I’ve got to stay with it, I just feel like it.”