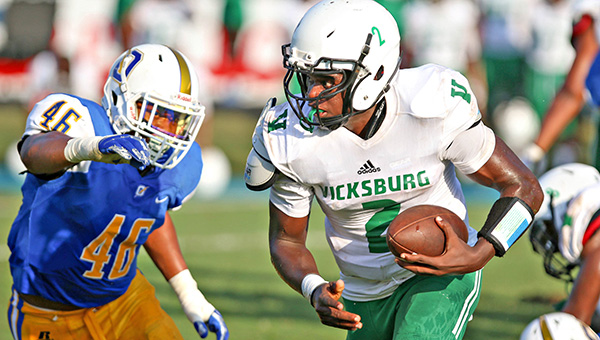 Every team expects to make a few mistakes in the early part of a football season, and the Vicksburg Gators are no exception.

They could have done with a few less than they had in last week’s Red Carpet Bowl against Oxford, however.

The Gators committed 16 penalties for 107 yards — including eight before the snap — which hamstrung an offense that was already finding tough sledding against a good Oxford defense. They finished with just 116 yards and committed two turnovers in the second half when a touchdown could have tied the game, and Oxford went on to win 21-6.

It was a rough effort that cost the Gators a chance at a victory, and one they need to bounce back from in a hurry as defending Class 6A champion Clinton comes to Memorial Stadium this Friday night.

“First game, we knew it was going to be a lot of kinks we had to iron out. The only way you can do that is on Friday nights under the lights,” Vicksburg coach Lorenzo Breland said. “We just made a lot of mental mistakes. They made a lot of mental mistakes. Conditioning definitely played a factor in it. The weather we’ve had, we probably haven’t been able to get out the past two weeks. That’s no excuse. We just have to get back to work.”

Vicksburg’s defense played well in the opener. A busted coverage resulted in an early touchdown pass for Oxford, but defensive back Jamaal Jefferson atoned for it by taking an interception 30 yards to the end zone for a touchdown.

Oxford only had 92 yards of offense in the first half, and 291 in the game. Most of the yardage came on two scoring drives, a 75-yarder on the opening possession of the third quarter and an 80-yard march that sealed the victory with 2:06 remaining in the fourth.

The Gators also recovered a fumble midway through the fourth quarter, when the score was still 14-6, to end an Oxford drive and keep them in the game.

It was on offense and special teams, however, that the mistakes rained down and hampered the overall effort. Three consecutive pre-snap penalties on the PAT try following Jefferson’s touchdown forced the Gators to go for a two-point conversion instead, and it failed.

With the score still 14-6 in the fourth quarter, the offense had two false starts, an illegal forward pass and an intentional grounding penalty in the span of three plays. The string of mistakes turned a first-and-10 at the Oxford 28-yard line into fourth-and-38 from the VHS 44, and a potential scoring drive into a punting situation.

Oxford then fumbled on the ensuing possession, but the Gators went three-and-out after taking over at the Chargers 43-yard line.

All five second-half possessions for Vicksburg included at least one snap inside Oxford territory. None resulted in points.

Breland blamed some of the mistakes on a lack of outdoor work. Frequent afternoon rain and thunderstorms in recent weeks have forced the Gators to practice indoors at the ROTC armory, which limits the work they can do to drills and some light passing work. Because of that, Breland seemed confident the Gators could turn things around with a few days of dry weather.

“It’s the first good film that we’ve got, so we’re going to be able to watch it and review it, and get back to work,” Breland said. “We’ve just got to iron it out. We’ve got a good puzzle. We just have to figure out how to put all the pieces into the right place. It’s going to happen. At no point did we think these first four games were going to be easy. The thing is, we have to put this one behind us and get ready for Clinton next week.”

The process started with Sunday’s film review and workout, and continued with Monday’s practice. Breland said after Friday’s game that his Sunday critique would not be kind.

“It’s going to be pretty intense. But that’s one of the things we’ve been working on all summer. Conditioning played a major part. We ran out of gas. But that’s no excuse for execution. That’s no excuse for mental mistakes. At the end of the day, we just have to clean it up,” Breland said. “We’ve just got to refocus. Have a short memory. Let’s clean it up, let’s learn from it and move on. That’s the main focus.”

CLINTON AT VICKSBURG
Friday, 7 p.m.
Radio: 1490 AM and 107.7 FM
Online: For live updates on Friday night, visit twitter.com/vixpostsports and facebook.com/thevicksburgpost

New Sherman Avenue principal has wealth of experience on…