St. Aloysius could answer some huge questions Friday at ACCS 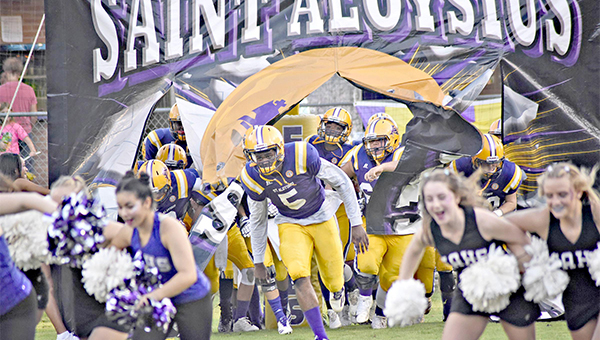 The St. Aloysius Flashes rip through a banner at the start of last week’s game against Leake Academy. The Flashes will head to Natchez this Friday to play Adams County Christian School. (Courtland Wells/Vicksburg Post)

It’s not often that a Week 2 matchup can be a pivotal measuring stick in a team’s season, but that’s where the St. Aloysius Flashes find themselves.

The Flashes are coming off a loss in last week’s season opener and head to Natchez this Friday night to face Adams County Christian School, which is a team with championship aspirations of its own.

How much the Flashes improve from last week — and how well they stand up to top-flight competition — will give a glimpse into how the rest of the season might go, coach Michael Fields said. It’s an especially important test with the District 3-AAA opener against Central Hinds looming next week.

“This game is going to tell me a lot about whether we’re a playoff team,” Fields said. “It’s about playing a good team and finding out, how good are you?”

It was hard to nail down the answer to that question after St. Al’s first game. Its defense hung tough against Leake Academy, but the offense didn’t score until late in the fourth quarter of a 21-13 loss.

The offense once again showed some big-play capability, with Antonio Thompson hitting Ryan Theriot for an 87-yard touchdown pass and then the Flashes scoring another touchdown in the two-minute drill, but the defense also gave up two fourth-quarter scores that allowed Leake to stay a step ahead.

The uneven tone of the game revealed some weaknesses Fields was already aware of, as well as some points of emphasis to improve upon during practice this week.

“The longer the game went, the better we played. We saw where our depth hurt us, but hopefully with that ballgame we showed in the fourth quarter where we also had a lot of resilience,” Fields said. “Everybody hates to lose, but sometimes you lead a lot from losing and the kids want to get that bad taste out of their mouth.”

Adams Christian knows that feeling all too well. The Rebels finished the 2016 regular season with an 11-3 record, but lost 42-7 in the MAIS Class AAA championship game to Indianola Academy.

ACCS started this season with a 34-7 blowout of Central Hinds and is looking to make another deep playoff run.

ACCS showed balance in its opener by scoring two defensive touchdowns and adding three offensive scores of 20 yards or more.

“They’ve got some pretty good ballplayers. They’re big up front and have speed on the flanks,” Fields said. “They’ve assembled a pretty good ballclub. But the pressure is on them. They’re expected to win.”